Patient safety ward round checklist via an electronic app

Patient safety is the tentpole around which modern healthcare is built. Though awareness of shortcomings in safety checks in the medical community is growing, implementing systematic approaches similar to those utilized in other high reliability industries is proving challenging. Though once thought to be unavoidable, researchers have recently shown potential for improvement through preventative measures. This crystalized in earnest with the publication of the Harvard Practice study in the 1990s which spurred a number of studies in the potential for harm reduction in clinical settings. Systematic checklist approaches have proved highly efficacious in these other high reliability industries, thus we aimed to firstly establish a baseline for patient safety practices on routine ward rounds in a tertiary care center in Dublin, Ireland and secondly to test the feasibility of implementing an electronic patient safety checklist application. 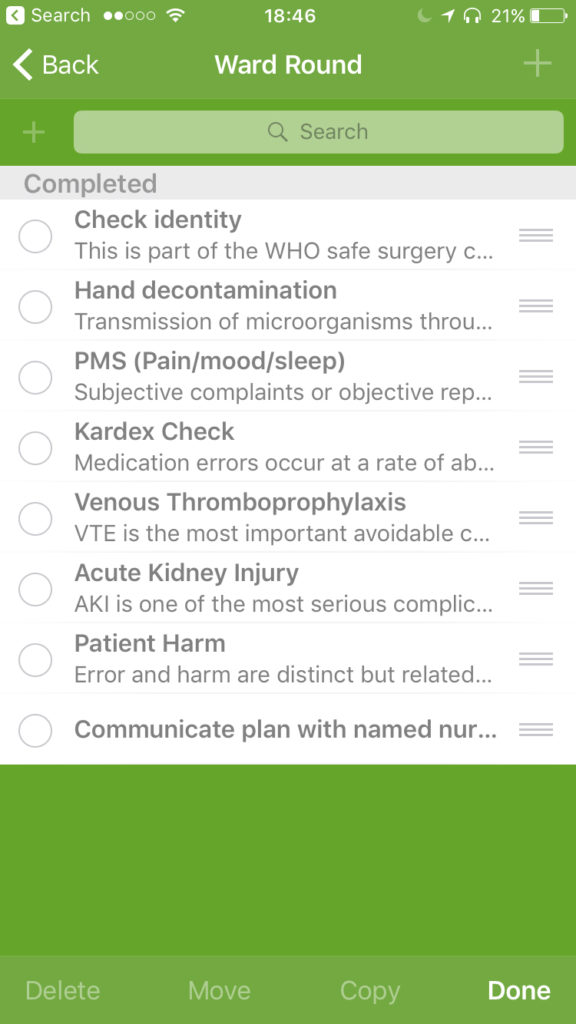 We designed a standardized checklist comprising eight standard clinical practice items including whether the patient’s name and identification were checked, whether their medications were reviewed, whether the physicians decontaminated their hands prior to patient contact and whether adequate precautions were taken to avoid venous thromboembolism due to stasis. In order to test this checklist against current practice, we formed two research teams; one auditing a medical team to establish a procedural baseline, and an intervention team concurrently enforcing the implementation of the checklist. This programme was conducted over a two week period, and was followed up one month later in a retrospective analysis of the patient charts utilizing the IHI Global Trigger Tool to determine variance in outcomes between the experimental groups. The Global Trigger Tool identifies undocumented medical errors, specifically those resulting in patient harm, by allowing for a more accurate assessment of adverse medical events through analysis of the patient’s medical documentation. Feedback from the audited physician participants was also considered in appraising the viability of the application.

A total of sixty two unique patients were observed over greater than one hundred individual encounters. Our results demonstrated a statistically significant difference (p < 0.005 following Bonferroni correction) on eleven variables of a total of sixteen. Important items missed by the auditing team included a low adherence to patient identification, hand decontamination and the presence of a nurse on rounds. The team where the checklist was enforced had much stronger compliance generally, and suggested on retrospective audit to have been safer. Physician feedback was generally positive, with the suggested stipulation that the checklist be integrated into a hospital-based electronic patient record system. 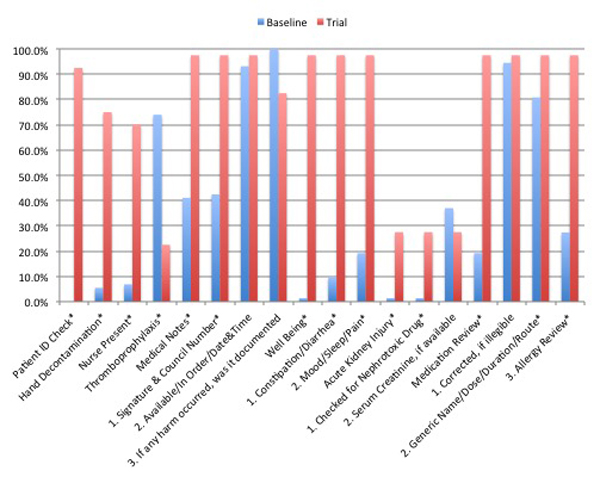 In summary, the baseline audit demonstrates a significant practice bias on daily ward rounds in favor of the omission of several key proven patient safety practices including obtaining up-to-date reports from nursing staff and prompting hand decontamination. Results of the intervention arm demonstrate not only the positive benefits, but also the feasibility of using the checklist application on daily ward rounds. Specifically, we demonstrated it was possible using a simple smartphone App to prompt doctors on rounds to check simple but proven care items, without compromising efficiency, to promote situational awareness for potential errors and more importantly harm. This was the view held by physicians and researchers alike in this study, and what the results objectively demonstrated in our analysis.