Pulmonary embolism (PE) remains a significant cause of death in trauma patients. However, this patient population is also at risk of ongoing bleeding, making anticoagulation (Heparin, Coumadin, etc.) impractical. This puts trauma surgeons and vascular surgeons alike in a dilemma: to anticoagulate, which could worsen bleeding, or to defer anticoagulation, which could result in potentially life-threatening PE.

Some have suggested inferior vena cava filter (IVCF) placement as a solution. This device is a small “metal umbrella” placed in the inferior vena cava (IVC), stopping blood clots from travelling to the lungs, preventing PE without risk of additional bleeding. However, previous studies on this subject have been mixed. Several studies have shown decreased mortality and PE with prophylactic IVCF placement. However, there are also studies that have shown no difference in mortality, even in carefully selected high-risk patients. It is also important to remember that placing an IVCF is not a benign procedure, as there can be complications, including venous thromboembolism (VTE) at the insertion site, device migration, and IVC thrombosis. It has also been previously noted that significant numbers of retrievable IVCFs placed in trauma centers were never removed after it was no longer required. 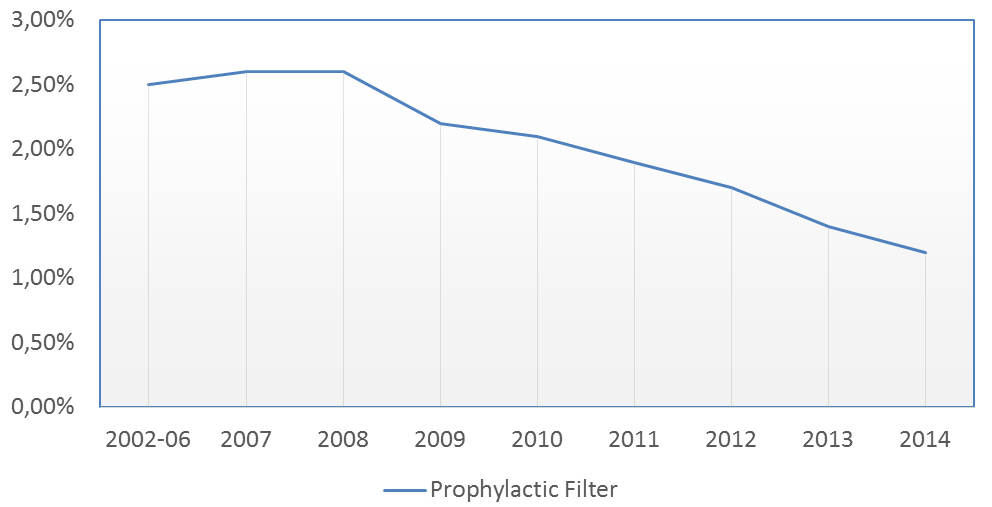 There were no guidelines concerning placement of IVCF in patients with no evidence of PE or VTE until 2008, when the American College of Chest Physicians recommended against routine placement of prophylactic IVCF. The purpose of this study was to examine recent trends and risk factors present in prophylactic IVCF placement in trauma patients.
The authors queried the National Trauma Database (NTDB), a database in which over 700 facilities voluntarily submit trauma-related outcomes, for patients who received an IVCF from 2002 to 2014. Pediatric patients, burn patients, and those pronounced dead on arrival were not included in the analysis. The cases were then divided into two groups: those who were diagnosed with VTE were considered to have a therapeutic IVCF, while those who did not have VTE diagnosis were considered to have a prophylactic IVCF.

Of over 2 million patients in the NTDB, 2.5% had received an IVCF during their hospitalization. Seventy-seven percent of these were placed prophylactically, and the proportion of prophylactic IVCF decreased over the study period (Fig. 1). Demographic information and information about injuries were also collected.

Based on this data, the authors were able to conclude that prophylactic IVCF placement in trauma patients has been steadily decreasing, which may be due to guidelines released in 2008 that recommend against it. There were also factors associated with IVCF placement that did not correspond with increased risk of VTE, which warrants further examination.