Preference for capretto and chevon depending on familiarity

The “capretto”, i.e. four to seven-week old kid fed on milk, is the traditional and, still, the main meat product in this class. It is a major component of farm income during the Easter and Christmas times. However, not all the young kids are available during these holydays periods, because of late births that occur randomly or are programmed to extend the dairy season. There is producer interest to diversify fresh goat meat offerings, to provide heavier carcasses and chevon meat beside traditional capretto outside the peak demand periods. 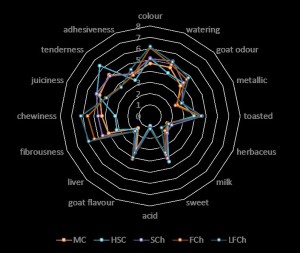 Animal age and changes in feeding regime modifies the intrinsic characteristics of goat meat, including its perceived appearance, texture, taste and flavor. Sensory diversity is an important factor in consumer attitudes towards meats. In Italy, while capretto meat is considered a delicacy, meat from later matured goats has no real market. A limited or a complete lack of prior experience with a food or with its flavour principles may result in poor consumer acceptability for meat from matured goat. Indeed, several authors demonstrated that familiarity is one of the most important drivers of preference for other food products. It reduces product uncertainty and leads to a more likely match between expectations and product characteristics.

The research aimed at assessing liking and preference for capretto and chevon as a function of consumer familiarity with goat meat. The goat meat was obtained from buck kids of Alpine breed, and farmed as traditional milk capretto (MC; 1-1.5 months), heavy summer capretto (HSC; 3-4 months of age), summering chevon (SCh; reared at pasture until 4-5 months of age), fall chevon (FCh; 5-5.5 months of age. Chemical, physical and sensory analysis were performed on the five meat types.

The goat meat types were clearly differentiated according to their appearance and texture properties. The instrumental parameters and the sensory attributes perceived by trained panel were in close agreement with each other, and consistently provided a significant explanation of meat peculiarities.

HSC was the most tender meat, having less cooking losses than both MC and redder chevon types. With aging of kids, meat lost its milk aroma (MC) and sweet taste (HSC) and acquired an increasing intensity of goat flavour and livery notes, partially related to feeding regime and fatty acid profile (Fig. 1.).

Fig. 2. Preference for the five different type of goat meat according to familiar and unfamiliar groups.

The consumers clearly perceived the sensory differences between goat meat types as reflected in the liking ratings. In general terms, the most well liked meats were traditional capretto and heavy capretto, the scores of which were close to the ‘like moderately’ level. The less pleasant meat was chevon of FCh and LFCh type that received scores only marginally higher than ‘like slightly’. However, classifying the consumer considering their familiarity with goat meat, we identified the Unfamiliar group (UG, 50%), the Familiar Group (FG, 50%). The level of familiarity with goat meat influenced the liking ratings and preference for chevon, as demonstrated by Fig. 2 that summarizes the frequency of the preferred goat meat type in the two groups of consumers. The UG showed higher preference for capretto versus chevon, particularly the fall ones. In comparison, those consumers who were familiar with the product reduced their preference for goat meat only when tasting the late fall chevon meat.

Consumers familiar with a specific type of goat meat had superior ability to appreciate new, distinctive characteristics of the product, despite the fact that they were used to eating capretto. However, the liking and preference for the late fall chevon resulted still low.

Concluding, providing heavier carcasses outside the peaks of festival demand is promising for the goat industry, because a niche market of consumers preferred chevon to capretto.