The gut is nowadays seen as a site of cross-talk and interchange between the inner body (supposed to be sterile, namely free of viable harmful bugs) and the outer contaminated world, mainly entering the digestive tract through the act of alimentation. Hence, the gut is expected to fulfill two main goals: elaboration of nutrients, and defense from carried-over invaders. In steady-states, the latter fulfillment requires a chronic low-grade alarm effected by the presence in the gut wall of low numbers of white blood cells aiming at immobilizing and eventually kill unwanted visitors; setting of the alarm bar higher, will mean extravasation of fluid and blood from veins with influx of a mob of armed white blood cells, concentration of cell killer molecules, swelling and warming up of this war stage, in another words a scenario of inflammation. The neat result of benefit or damage of an inflammatory bout is the function of the balance between its defense achievements and the (tissue) damage sustained by the war theater; the latter event has been smartly synthesized by some as: Too much of a good thing. Inflammation-related tissue damage at the gut level manifests itself as loss of mucosa, ulcer and abscess formation.   Since the beginning of the 20th century, clinicians have named these events with the well-known labels of Crohn’s Disease and Ulcerative Colitis or IBD (inflammatory Bowel Disease, as the umbrella acronym). If most of the acute IBD attacks is known to be quenched by a cortisone shoot, the maintenance of the quiescent state (remission) has traditionally been much more demanding. The need for a remission maintenance drug in IBD has satisfactorily been fulfilled at the beginning of the 1980’s with the introduction of the thiopurines (Fig. 1).  The thiopurines are analogues of the well-known four bases that form the backbone of DNA. “Cheating” the enzyme that elongates the DNA helix, they can arrest the process by masquerading as a true base while halting the base piling up. Interruption of DNA synthesis of the white blood cells sustaining an IBD episode will result in immune suppression of these cells, replication stopping, and facilitated termination of the inflammatory process. Thanks to this peculiar mechanisms, the thiopurines were first proposed as anti-cancer agents, and then, coincidentally with their novel indication for IBD, after the 80’s were claimed to reduce the hospitalization rate for IBD, and decrease the risk for the IBD-linked intestinal tumor. 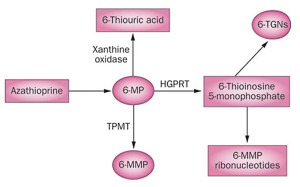 Fig.1. Simplified sequence of events in thiopurine metabolism. The liver converts the ingested azathioprine into 6-mercaptopurine (6-MP), i.e. the molecule we have administered to patients to skip azathioprine and avoid its gastric intolerance (see text). Downstream metabolism of 6-MP, directed by the enzyme HGPRT, then leads to the final immune suppressive molecules as detailed in the text.

The introduction of thiopurines in oncology and gastroenterology has marked a milestone since the 1960’s: Gertrud Elion, the scientist who characterized them was awarded the Nobel Prize in 1988.

Accumulating experience has shown that some 10-20% of the candidate IBD patients do develop nausea and severe gastric pain upon the swallowing of even a single thiopurine dose. A significant deal of work has obviously been done in the last two decades to respond to such a trivial drawback, and results have been achieved recently.

Supported by the hints of others, in a recent paper we have shown that 60% of the cases of gastric intolerance of thiopurines can be resolved by 6-mercaptopurine (Fig. 1), simply the active form derived in the liver from the inactive pro-drug azathioprine (despite being a pro-drug, azathioprine is the most commonly prescribed thiopurine prescribed in Europe).

This simple switching strategy ensures that patients with CD or UC can safely continue to receive a class of drugs that saves the gut from deadly inflammation.

Last but not least,  and in times of budget restrictions, one should note with pleasure  that  in Europe one day of thiopurine treatment, is worth some 80 cents of an Euro.