According to the latest count, human body has 37.2 trillion cells. They all have the same genetic material, half deriving from a sperm cell, the other half from an egg cell. Consequently, all the cells are in principal genetically identical. The genetic material seems to be, somewhat surprisingly, mostly inactive. Or to be more precise, only a small percentage of it contains material that has been defined as ‘genes’. Humans have about 30 thousand genes, only twice more than what a common fruit fly has. Genes are the entities that code for proteins, the work horses of human body, hemoglobin to carry oxygen, antibodies to fight diseases, receptors to convey messages. 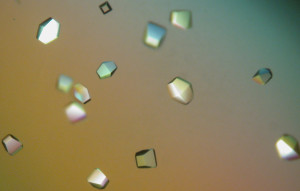 Our studies are focused on cell receptors. They are sensors that are imbedded inside the cell membrane, a semisolid layer dividing the inside of the cell from the outside. Receptors stick out of the membrane like cat whiskers, ready to bind to various transmitter molecules. Once bound, the receptors activate and send messages from outside to the inside of the cell. In a healthy cell the receptors transmit this information only when needed, when they meet the messenger. However, in many sick cells, for example in various cancers, the receptors are active uncontrollably, sending in wrong information continuously, like a hacked email account sending thousands of messages per second to un-expecting recipients.

We study receptors using two parallel avenues. First we want to understand details of their three-dimensional structures and their functional and mechanistic particulars. We purify the receptor molecules and place millions of them in a heavy sugar solution where they might form crystals, just like diamonds. Then we shoot them with X-rays to get a picture of the receptor protein. It’s like taking a photograph of your child’s hand in order to knit a proper-sized mitten. In place of the lens there’s crystal, and in place of the light there are X-rays. Once the film has been analyzed by computer programs, the picture is ready.

Secondly, we want to understand how to use the mechanistic details to figure out new ways to prevent or cure diseases. Since some receptors are overly active in many cancers, blocking their activity would, potentially, prevent the growth of cancer. Medical research history is full of sad examples how this approach has failed. Fortunately, there are also good ones. For example Gleevec, a drug developed in the 90’s to treat CML-leukemia. Before Gleevec, CML diagnosis was a death sentence. After Gleevec treatment, 95% of patients were ‘normalized’. Gleevec was developed using structural details of the inside part of a receptor on a cell that has gone amok. It’s a small chemical, a bit like ibuprofen taken for head-ache. Gleevec binds specifically between the thumb and the index finger in the mitten knit above, figuratively speaking, nowhere else.

Although such small chemicals have many attractive features, easy administration as a pill, stability, universal delivery in the body, they often have poor specificity and not-tight-enough binding characteristics. An alternative approach is antibodies. Antibodies block their targets, for example the misbehaving cancer cell receptor, by binding extremely tightly and with very high specificity. We have specifically tested antibodies on lymphoma and leukemia cells and shown that up to 90% of the cells can be killed. A particularly attractive feature of antibodies is that they can be raised against practically any part of, for example, the cell surface receptor, while small chemicals need a special ‘groove’, like the one between a thumb and an index finger. Hence, it’s no wonder that most new drugs entering clinical trials are antibodies or their fragments.