Rejuvenating cells to iPS: just how profound are the changes?

Induced pluripotent stem (iPS) cells were one of the greatest discoveries of the 21st century, for which a Japanese scientist Shinya Yamanaka and his colleagues received the Nobel Prize in 2012. iPS cells are now the key technology for regenerative medicine and personalized medicine disease therapeutics. The iPS reprogramming process which allows you to turn any somatic cell into a rejuvenated “pluripotent” cell is thought to progress through key sequential stages: initiation, maturation, and stabilization. The earlier stages are associated with profound changes in cell behaviour such as mesenchymal-to-epithelial transition (MET), switch to glycolysis, changes in cell cycle progression patterns etc., whereas later stages involve DNA demethylation, telomerase activation and telomere elongation, and activation of pluripotency gene networks. 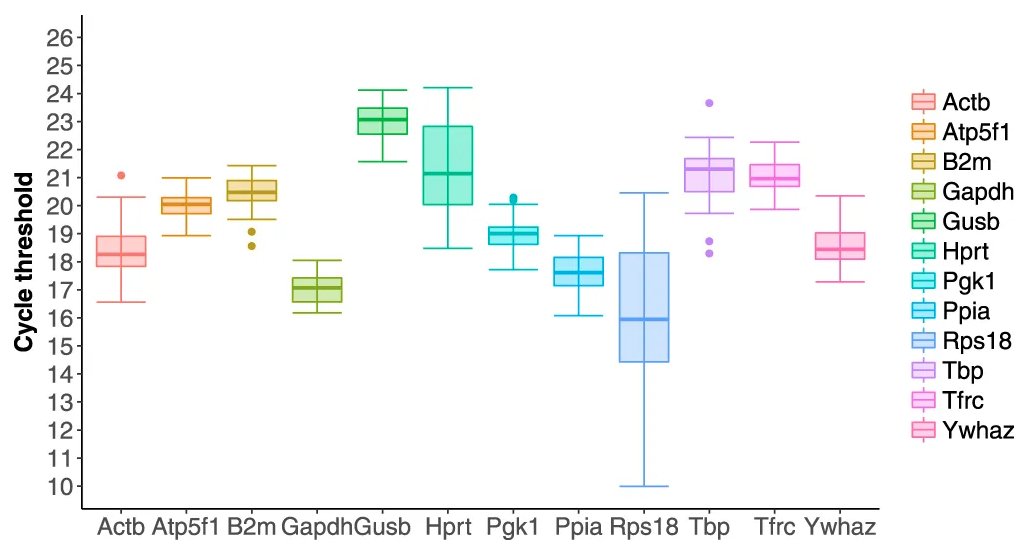 iPS reprogramming represents a forced change in cell fate and is associated with profound alterations in gene expression. In particular, it is known that these alterations include most basic, “housekeeping” functions such as cell metabolism, speed of the cell cycle, and lipid profile. In our work, we asked whether these changes are so great as to affect the levels of genes that are associated with these “most basic, housekeeping functions” in cells, but have historically been considered stable regardless of the cell state.

We have chosen 12 most commonly known “housekeeping” genes, such as cytoskeletal actin (Actb), glycolysis-associated Pgk1 and Gapdh genes, mitochondrial Atp5f1, ribosomal Rps18 etc. Using quantitative polymerase chain reaction (RT-qPCR) we assessed the stability of these genes during 20 days of the iPS reprogramming process, following mouse neural cells turning into iPS cells. We analyzed gene expression data based on five statistical algorithms and found strong variations in genes’ stability throughout the iPS reprogramming. Then, we ranked the genes for their stability to determine which were the most stable and which were the least stable. The most stable genes included Atp5f1, Pgk1 and Gapdh, while the least stable genes were Rps18, Hprt, Tbp and Actb.

It is interesting to note that all of the three most stable genes identified in our work are related to ATP production. The Atp5f1 gene is a part of mitochondrial ATP synthase, Pgk1 (phosphoglycerate kinase 1) is an ATP-generating enzyme and is considered an important part of the glycolytic pathway, and Gapdh, or glyceraldehyde 3-phosphate dehydrogenase, also belongs to the glycolytic pathway.

When normalizing expression data to a reference gene, it is of crucial importance to make sure that the reference gene of choice is stably expressed throughout all experimental conditions. The need to confirm stability of expression is even greater in case of iPS reprogramming, as housekeeping genes could be affected by dramatic changes in chemical metabolism of the cells. We showed that one should be extra careful in choosing reference genes during iPS reprogramming. Overall, this study and its implications are particularly relevant to investigations on the cell-state and pluripotency.