Relative Reinforcing Efficacy (RRE) is a central concept of behavioral economic theories of addiction referring to the behavior-strengthening or behavior-maintaining effects of a drug or specific dose of a drug. A recent approach for assessing RRE within the smoking population is the Cigarette Purchase Task (CPT), which assesses hypothetical cigarette purchases as a function of escalating prices. To our knowledge, only two studies have assessed whether demand indices can predict abstinence rates among samples of college students and smokers with other substance use disorders (SUDs). However, no study to date has assessed whether demand indices can predict abstinence outcomes in adult smokers who are motivated to quit. 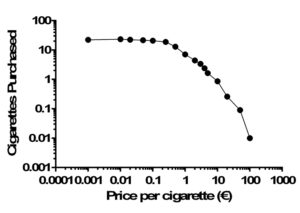 Fig. 1. Cigarette purchase demand curve, with the x-axis providing price in euros (€) and the y-axis providing self-reported consumption in cigarettes. Data is plotted in log units.

The primary aim of the present study was to explore whether cigarette demand indices derived from the CPT would predict clinical outcomes at the end-of-treatment among adult smokers who were motivated to quit and were randomized to two different smoking cessation protocols, namely Cognitive-Behavioral Treatment (CBT) in combination with Contingency Management (CM) for smoking cessation, versus CBT alone.

Participants were 159 smokers aged 44.8 (SD 12.6) years randomized to CBT alone or combined with CM. They completed the CPT at baseline. With the aim of assessing the predictive value of CPT demand indices over smoking abstinence, the dependent variable was the number of days of continuous smoking abstinence from the quit day until the end of treatment.

The CPT used in this study generates a cigarette demand curve, reflecting the quantitative relationship between demand for cigarettes and escalating price. The CPT generated five cigarette demand indices: (1) breakpoint (i.e., the first price at which consumption was zero), (2) intensity of demand (i.e., cigarette consumption at zero cost), (3) elasticity of demand (i.e., sensitivity of cigarette consumption to rises in cost), (4) Omax (i.e., maximum cigarette expenditure) and (5) Pmax (i.e., price at which expenditure was maximized).

To assess the predictive value of each CPT index over the number days of continuous smoking abstinence at the end of treatment, five simple regressions were performed to assess the predictive utility of the CPT indices independent of any other variables (independent model). Afterwards, a more stringent test of the incremental predictive utility of the variables was conducted carrying out hierarchical multiple regression with the same CPT indices (covariate model). Figure 1 illustrates the CPT demand curve for 19 different prices.

With regard to the independent model, higher elasticity was associated with more days of continuous smoking abstinence for participants in the CBT + CM condition. For this independent model, elasticity significantly explained 6.8% of the variance. Independent regression analyses for the CBT condition revealed that none of the five indices of demand significantly predicted days of continuous smoking abstinence at the end-of-treatment.

This is the first study that provides support of CPT as a valid measure of CM outcome in a community sample of treatment-seeking smokers. This research further evidences the association between cigarette demand indices and smoking-related measures, supporting the convergent validity of the CPT.