Role of heterochromatin in establishing and changing cell fate

In development, a fertilized egg replicates many times, growing into an embryo and differentiating into many types of cells. In people, differentiation generates brain cells, muscle cells, and fat cells, among others. Each cell type has its own specific shape and function that is determined by the activation of particular genes in chromosomes. Differentiation also involves the silencing of genes that are inappropriate for a given cell; for example, brain genes must be kept silent in a muscle cell. 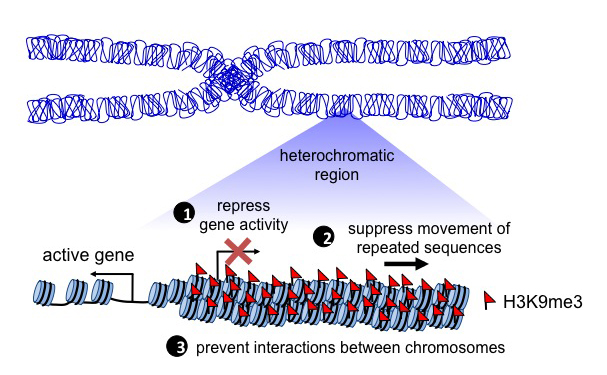 The DNA in the cell nucleus is organized as “chromatin,” where the DNA is wrapped around groups of histone proteins. Chromatin is classified into two major categories, based upon the histone chromosomal structure and gene activity. Euchromatin encompasses the more open regions of the chromosome and is associated with many regulatory proteins that enable gene activity specific to each type of cell. Heterochromatin describes the more compact, or closed regions of the chromosome and is associated with proteins that keep genes inactive, or repressed.

The histones have different kinds of chemical modifications that can help indicate that a region of a gene should be active or repressed. Diverse histone modifications are associated with gene activity and fewer, but equally important, histone modifications are associated with gene repression. Among the histone modifications that are enriched in heterochromatin, the most prominent is the addition of three single-carbon “methyl” groups to the 9th amino acid, a lysine, in histone H3; generating H3K9me3.  Special enzymes are directed to generate H3K9me3 over a region of chromatin; this histone “mark” then recruits various other proteins to the region, which in turn compact the chromatin into the characteristic heterochromatin structure.

The heterochromatin structure is so tight that it not only represses gene expression, it also prevents repeated regions of the genome to come together, thus stabilizing chromosome integrity. The human genome, and the genomes of most animals and plants, has many repeated DNA sequences scattered around the chromosomes. Some of these repeated sequences can move from one chromosomal location to another, potentially causing mutations. Also, if the repeated sequences, by virtue of their similarity, joined one another during processes involving chromosome dynamics, it could result in aberrant chromosome structures and major disruptions of cell function.

It is not known if heterochromatin initially evolved to suppress aberrant chromosomal dynamics or to repress gene activity. Yet it is clear that the two functions of heterochromatin have become interdependent, with genes that are adjacent to repeat sequences being repressed in concert.

Unraveling the molecular mechanisms controlling H3K9me3 deposition and heterochromatin structure will enable more precise strategies to perturb heterochromatin at specific sites and thus enhance our ability to control cell identity at will.