Taking a chemical compound from early discovery to clinical trials is a process that is fraught with risks. It is therefore, important to optimize preclinical test systems to improve the chances of developing a compound likely to be effective in the clinic. Attempts to improve the predictability of experimental models, for instance for studying anti-inflamammatory drugs, has a long history. Much emphasis is placed these days for this purpose on major technical advances, including genetically transformed mice, which may have developmental drawbacks. However, it is also possible to gain significant new information on disease processes as possible drug targets by modifying existing techniques to generate novel findings. 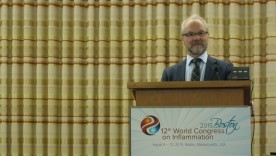 Drawing from personal experience, the article provides examples of how, within the context of inflammation, tinkering with technology can give important new results. Thus, developing a novel two-way metal cannula allowed new data to be generated on the role of prostaglandin E (PGE) in a standard experimental model of arthritis. Thereafter, carrying out inflammation studies in rats that were dietarily deficient in essential polyunsaturated acids revealed that very low concentrations of PGE could induce anti-inflammatory as well as their well-known pro-inflammatory actions.

The use of a dietarily induced deficiency in selenium was also successful in uncovering in rat cells the mechanism of action of a new selenum-containing drug candidate, ebselen. Instead of releasing the selenium, it was found that the chemical acted like an enzyme to catalytically breakdown tissue-damaging reactive oxygen products, an action that was confirmed in a new model of arthritis, specifically devised for the purpose of generating reactive oxygen products in the joint.

The use of a simple experimental model was also crucial in demonstrating the mechanism of action of an antibiotic as a potential immunomodulating drug for lung inflammation. The model was lung inflammation induced in the mouse by administering bacterial endotoxin (LPS) via the nose. A series of experiments with this model revealed that the antibiotic azithromycin was able to inhibit the inflammation by changing the activity of macrophages in the lung from an inflammatory to an anti-inflammatory subset.

The lessons learned from these sorts of experiments are being applied in the experimental sytems being set up at the Fraunhofer IME-TMP research group in Frankfurt, Germany. Translation of findings made at a molecular level, through cellular tests to experimental animals and eventually to humans is carried out using techniques that reflect as closely as possible the techniques used to measure responses in humans. By investigation at each stage of a profile of drug action, rather than just actions in a single test model, it is possible to gain a much more precise picture of the pharmacological activities of a potential new drug. Much effort is being expended in various laboratories to standardize and validate test systems, so that the robustness and predictivity of these preclinical techniques for clinical trials in humans can be enhanced.

This article contains the text of a lecture given on the occasion of the presentation to the author of the Lifetime Achievement Award of the International Association of Inflammatory Societies in 2015.

Progress does not just come in giant leaps: adapting techniques for the study of inflammation to novel applications.
Parnham MJ
Inflamm Res. 2017 Jan