About 6 million people die for use or exposure to cigarette smoke; indeed smoking is the most important evitable cause of death in the developed countries, and it is a major risk factors for cardiovascular diseases.
Chronic cigarette smoke exposure modifies the haemostatic process by interfering in the physiological balance of antithrombotic/prothrombotic factors and profibrinolytic/antifibrinolytic factors and specifically by affecting the functions of different cells (endothelial cells, leukocytes and platelets), fibrinogen and coagulation factors. These modifications contribute to the generation of a prothrombotic milieu, which may lead to an acute thrombotic event. In particular, cigarette smoke engages the expression of pro-thrombotic and pro-inflammatory molecules that result in an alteration of vascular endothelium function. The vascular endothelium is an active monolayer of cells covering the lumen of blood vessels, separating the vascular wall from the circulating blood. For many years, the endothelium had been believed to be a simple cellular barrier. Truthfully, the endothelium is a highly selective barrier, metabolically active organ, and it plays a critical role in the maintenance of vascular balance and in the production of both antithrombotic and prothrombotic factors including different prostanoids as prostacyclin (PGI2), prostaglandin E2 (PGE2) and Tissue Factor (TF), the main trigger of blood coagulation. 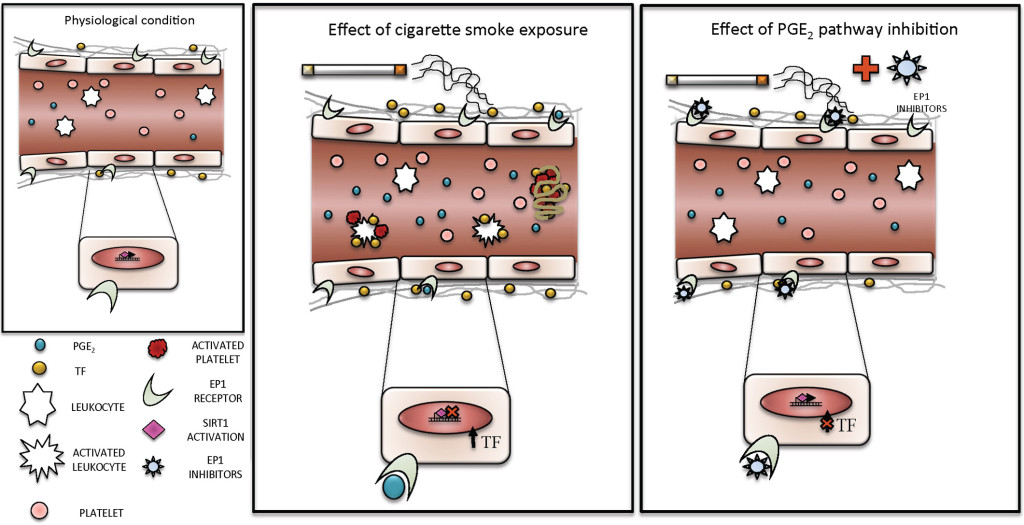 Fig. 1. Effect of cigarette smoke and EP1 receptor inhibitors on blood and endothelial cells. Exposure to cigarette smoke promotes the increase of circulating levels of PGE2 and TF. PGE2 binds its specific receptor (EP1) on endothelial cells, blocks the activity of SIRT1 and consequently induces the increase of TF expression and activity.The pre-treatment with specific inhibitors of EP1 receptor restores physiolgical conditions.

However, the mechanism by which cigarette smoke induces endothelium dysfunctions is still unclear.

Here, we show that circulating levels of PGE2 and TF are elevated in human active smokers compared to never smokers and that these two parameters are strictly correlated. Similar findings have been obtained in mice and in endothelial cells exposed to inflammatory cytokines in association with an aqueous extract of cigarette smoke (CSE), at a concentration easily achieved in bloodstream of smokers. Most importantly, our data not only provide the evidence of a link between PGE2 and TF, but also suggest that circulating levels of PGE2 or TF reflect, at least in part, the tendency of aortic damage and arterial thrombosis predisposition. In particular, we showed that PGE2 is a key mediator in the up-regulation of TF, and in vitro study strongly support that this regulation is mediated by the interaction of PGE2 with its specific EP1 receptor, expressed on endothelial cells.

In addition, we showed that both cigarette smoke exposure and PGE2 treatment down-regulate SIRT1 expression, known modulator of inflammation and thrombosis. Interestingly, activation of SIRT1 by a natural compound resveratrol or by a specific drug, reduced TF levels induced by smoke and by PGE2, suggesting that smoking deactivates SIRT1 via PGE2/EP1 pathway with consequent regulation of TF.

Finally, we demonstrate that the activation of anti-thrombotic and anti-inflammatory signal cascades, by treatment with PGI2 analogue, completely prevented the damage of endothelium mediated by cigarette smoke.

All these findings confirm the great importance of endothelium in maintaining the balance between ‘good’ and ‘bad’ for preventing higher propensity to cardiovascular disease, proving another time the negative effect of cigarette smoke.

Moreover, we identified EP1 receptor as a potential new target for the prevention or treatment of cardiovascular disease.