Sneddon syndrome (SS) is a non-inflammatory thrombotic arteriopathy characterized by the combination of cerebrovascular disease and livedo racemosa (LR). Autopsy studies are scanty. We described the full clinico-pathological study of an SS patient with marantic endocarditis.

Two years later, she was readmitted with an acute, afebrile picture of distal limb ischemia that caused dry gangrene, the patient dying 8 days after admission.

In this case the possibility of primary antiphospholipid-related SS cannot entirely be excluded given that, inevitably, at the time of admission blood tests did not screen anti-cardiolipin and anti-β2GPI antibodies. Nevertheless, the possibility of SLE was ruled out, and normal coagulation profile including partial thromboplastin time and platelet function study argues in favour of idiopathic SS. 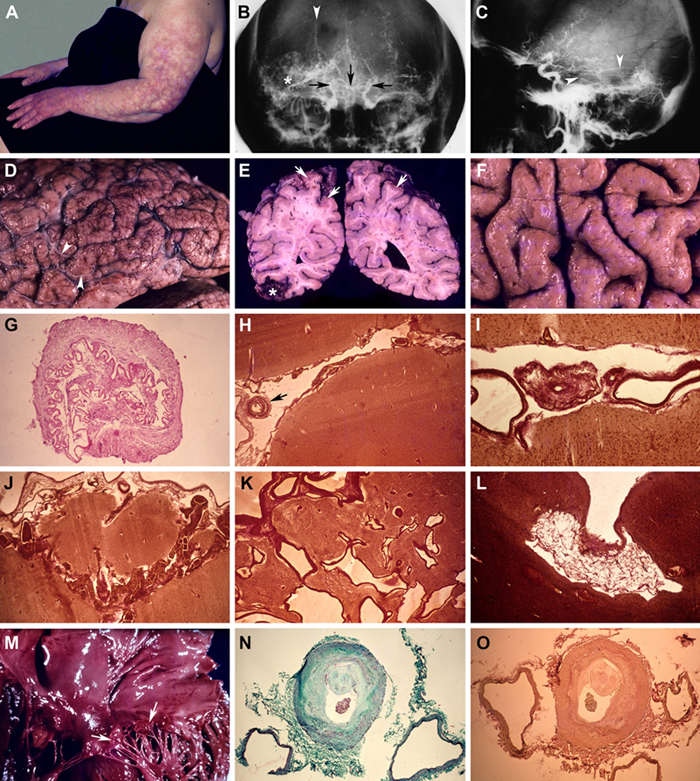 Fig. 1. (A) Extensive LR of the left upper limb, which also involved trunk, abdomen, buttocks and thighs. LR is defined as the persistent, not reversible with re-warming, violaceous, red or blue, reticular or mottled pattern of the skin of trunk, arms or legs, consisting of irregular-broken circles. Simultaneous left carotid and right retrograde brachial angiography (B) and right retrograde brachial angiography (C) showing complete occlusion of both anterior and middle cerebral arteries (arrows) and an arteriovenous malformation (AVM) in the right occipital lobe (asterisk) supplied by the tentorial branch of the carotid artery and meningeal branches of the occipital and middle meningeal arteries (arrowheads); a collateral network of vessels is visible in the base of the brain, as reported in moyamoya syndrome. (D) Close-up picture of the left brain convexity illustrating profuse network of subarachnoid collateral vessels; note the presence bloodless white vessels corresponding to occluded arterioles (arrowheads). (E) Posterior surface of coronal section through posterior horns of lateral ventricles, showing dilated atrium of lateral ventricles, prominent vascular profiles in subcortical white matter, several intracortical infarcts (arrows), an AVM of the right occipital lobe (asterisk) and brain atrophy. (F) After dissecting down the meninges, this close-up picture shows extensive brain granular atrophy. (G) Transverse section of the middle cerebral artery showing that its lumen is occupied by a partially recanalized thrombus; note also intimal hyperplasia, preservation of the internal elastic layer, and the absence of inflammatory infiltrates (Hematoxylin eosin, x63 before reduction). (H) Low-power view of a cerebral sulcus showing an arteriole with hypertrophied internal elastic layer (arrow) and hyperplasia of intrasulcal vessels (Orcein, x25 before reduction). (I) At higher augmentation, note the presence of a sulcal arteriole with intimal hypertrophy and reduplication of internal elastic lamina reducing its lumen, which is flanked by two larger venules (Orcein, x100 before reduction). (J) In some areas hyperplasia of subarachnoid vessels is so intense that it acquires the appearance of meningeal angiomatosis (Orcein, x40 before reduction). (K) Characteristic texture of the right occipital arteriovenous malformation consisting of vascular clusters without any intermediate capillary network, and with brain parenchyma interposed (Orcein, x63 before reduction). (L) Small intracortical infarct (Orcein, x40 before reduction); similar lesions (not shown) were observed in subcortical areas. (M) Note the presence of vegetations in the mitral valve (arrows). (N, O) These transverse sections of a brachial artery show widespread degeneration and enlargement of the intima, the internal elastica lamina being displaced outward and focally reduplicated. There is a voluminous thrombus adhered to the arterial wall. Again, note the absence of inflammatory infiltrates (Masson’s trichrome and orcein, x40 before reduction).

Our autopsy study confirms that the pathological basis of SS is a systemic occlusive, non-inflammatory vasculopathy mainly involving large to medium-size arteries and arterioles. It was characterized by intimal hyperplasia with musculoelastic proliferation, which could in turn lead to recanalized thrombosis. The observed marantic endocarditis, for a long time subclinical till the final episode of systemic embolism, supports the notion that idiopathic SS is frequently associated with heart valvular lesions. Furthermore, such systemic occlusive arteriopathy concurs with the proposal that valvular heart disease does not influence the type of brain infarct, namely that ischemic strokes are caused by widespread cerebral arteriopathy.

Cerebral angiography showed occlusion of anterior and middle cerebral arteries with collateral circulation and anastomoses via perforating vessels at the base of the brain, which depicted a moyamoya pattern. Macroscopic brain appearance illustrated a profuse network of subarachnoid vessels, some of them being occluded arterioles. We interpret that such vascular network is due to profuse collateral circulation of the brain via transdural anastomoses and anastomoses between intracranial arteries, and not as being a primary meningeal angiomatosis. The observed association between brain AVM and SS has not previously been reported and might be incidental. Be that as it may, AVM or pseudoangiomatosis associated with moyamoya pattern might be pathogenic in SS cases presenting with intracranial hemorrhage.