Mastication ability correlates with cognitive impairment in elderly persons. A longitudinal study of aging and Alzheimer’s disease indicates that participants with the fewest teeth had the highest prevalence and risk of incidence of dementia. There are abnormalities in the sense of smell having both raised olfactory thresholds and impaired odor identification in elderly subjects and patients suffering from Alzheimer’s disease. The subventricular zone (SVZ) generates an immense number of neuroblasts even during adulthood. These neuroblasts migrate to the olfactory bulb (OB) via the rostral migrating stream and differentiate into interneurons, which modulate the information of various odorants received by the olfactory sensory neurons. Animal models have shown that a reduction of mastication by feeding only a soft-diet impairs both olfactory functions and neurogenesis in the SVZ. 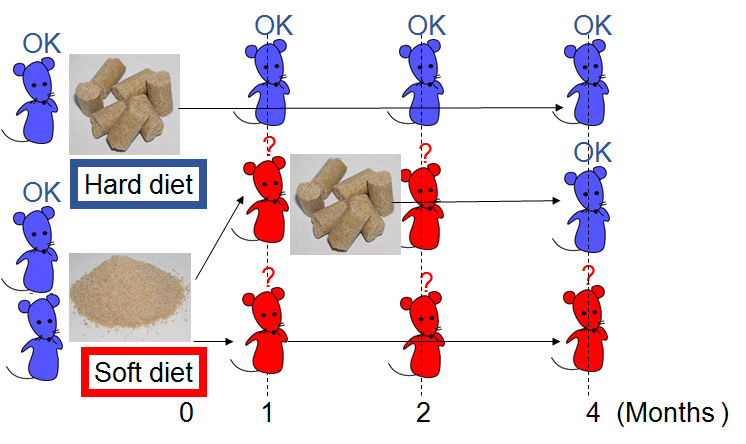 At this time, it is unclear how impaired mastication decreases and how hard-diet feeding recovers neurogenesis at the SVZ. Ingestion of a hard diet induces greater neural responses at the principal sensory trigeminal nucleus (Pr5), which receives intraoral touch information via the trigeminal nerve, than does a soft diet or no diet (Fig. 2). Sensory information from ingestion of the hard diet receives at the Pr5 is transmitted to the pedunculopontine tegmental nucleus (PTg) via the thalamus (Tal), somatosensory cortex (S1), and motor cortex (M1). Ingestion of a hard diet induces remarkable neural excitation at the PTg. Cholinergic and glutamatergic neurons of the PTg innervate to the substantia nigra pars compacta (SNc). Neurons at the SNc are activated by ingestion of a hard diet. Proliferative precursors in the SVZ express dopamine receptors and receive dopaminergic afferents. Dopamine increases the proliferation of SVZ-derived cells by releasing epidermal growth factor in a PKC-dependent manner in vitro. Dopaminergic neurons in the SNc innervate to the SVZ. Therefore, it is possible that the feeding with a hard diet maintained neurogenesis at the SVZ via the Pr5, PTg and SNc to keep olfactory functions.