Every spring people love to see the birds return with their cheerful song. Surprisingly, some of these songsters transport tiny, disease-carrying ticks. These bird-feeding ticks are sometimes infected with disease-causing microorganisms that cause serious illnesses in humans and domestic animals, including dogs, cats, and horses. 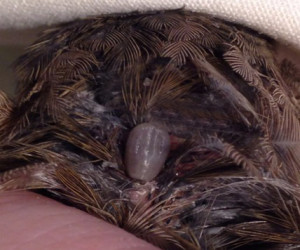 Recently, tick researcher, John D. Scott, and his colleagues found that 35% of the nymphs of blacklegged ticks, Ixodes scapularis, collected from songbirds in central and eastern Canada are infected with the Lyme disease bacterium, Borrelia burgdorferi. While en route to their northern breeding grounds, migratory songbirds release attached ticks at stopovers when they make landfall to replenish their energy reserves. When these fully engorged ticks drop off, they descend into the leaf litter, and molt during the next 6-8 weeks, and then are ready to seek suitable hosts.

Songbirds widely disperse Lyme disease vector ticks across Canada, and people do not have to go to an endemic area to contract Lyme disease. In fact, people can be bitten locally in their own backyard. These researchers have reported blacklegged ticks on migratory songbirds as far north as the town of Slave Lake, Alberta. In addition, they have collected bird-feeding ticks from songbird migrants as far north as southern Yukon.

During northward spring migration, songbirds that overwintering in South America transport ticks to Canada from as far south as Brazil. Scott and his colleagues tested these ticks, and found some of them to be positive for tick-associated pathogens.

In all, these researchers have identified 22 tick species collected from birds across Canada. Each species of tick has their own set of pathogenic microbes. In fact, the blacklegged tick has at least 8 tick-transmitted pathogens. If a tick is infected with one or more of them, it can transmit these disease-carrying microbes to its host.

For ticks, climate change is not a factor. On hot days, ticks descend into the cool, moist leaf litter, and are very comfortable. In winter, they again descend into the leaf litter and humus layer, and are cozy under an insulating blanket of snow. Blacklegged ticks are eco-adaptive because they have antifreeze-like compounds in their bodies. As a result, these winter hardy parasites can withstand outdoor air temperatures of -40 degrees Celsius under a thick layer of snow.

When the snow has disappeared in the spring, blacklegged tick adults promptly start their host-seeking activities. Whenever people are in wooded or grassy areas, they should do a full-body tick check before retiring for the day. Of course, if a tick is found, it should be removed promptly with fine-pointed stainless steel tweezers. The tick should be put in a tight-sealing vial of rubbing alcohol, and later be identified and, preferably, tested for tick-borne pathogens. Be sure to sanitized the bite site, and seek medical care.