Advances in tissue engineering led to the realization of human bioengineered skin substitutes for in vivo skin regeneration and in vitro applications. Notably, in vitro skin models are useful tools alternative to animal experimentation for testing the adsorption, accumulation, effects and/or toxicity of drugs, cosmetics and pollutants. The artificial human epidermis models, commercially available and currently used, consist of human keratinocytes cultured on matrix acting as an artificial dermis, and represent the entire epidermis. This is made-up, in the in vivo organisms, of self-renewing keratinocytes programmed to be replaced continuously from the basal lamina to the outermost layers. Therefore, cells acquire a migratory phenotype in a differentiation process for which well-defined cell layers or strata of increased differentiation and different morphology are recognizable from the bottom to the top. To date, information about the creation of specific and distinct epidermal strata, essential for the understanding of the interactions with external agents along the epidermis layers, is still missing. For the first time specific and distinct human epidermal strata were engineered by using polymeric membranes and keratinocytes.

Biodegradable membranes of chitosan (CHT), polycaprolactone (PCL) and a polymeric blend of CHT-PCL were prepared by phase-inversion technique. These membranes exhibit different and specific morphological, physico-chemical and mechanical properties that are able to modulate the interactions with cells, and, in particular, to strongly influence the cell morpho-functional behaviour of keratinocytes, modulating their terminal differentiation (Fig. 1). 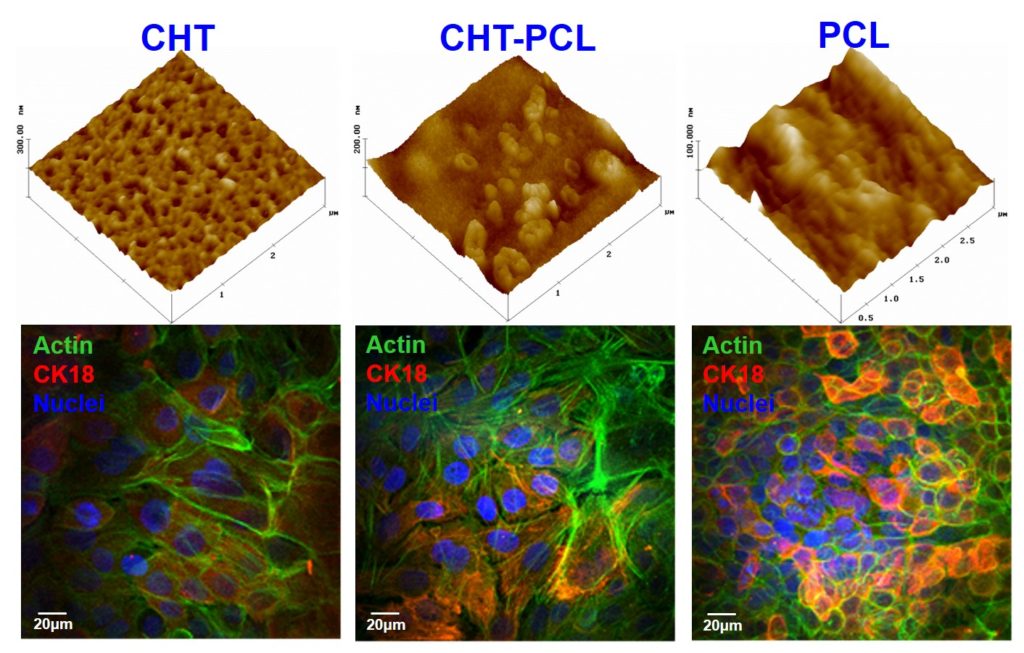 A high differentiation state of human keratinocytes, with morphological and functional behaviour like the cells in the stratum lucidum and corneum of the natural epidermis was triggered by CHT membrane. On this membrane, human keratinocytes grew in monolayer, and exhibited a flattened morphology with a high degree of spreading, and low cell proliferation. Interestingly, a high expression of cytokeratin 1 (CK1) was found, as a specific marker of the suprabasal levels of epidermis, despite the quite missing expression of cytokeratin 18 (CK18), as a marker of cell proliferation. The differentiated flattened shape that keratinocytes acquired on CHT membrane was driven by the surface hydrophilicity of the membrane and its intrinsic chemical structure, which is similar to the glycosaminoglycan matrix of the dermis.

CHT-PCL membrane, which displays a moderate wettability and surface microstructures, induced both flattened and more cuboidal cell morphology. Human keratinocytes on this membrane showed a lower cell spreading and maintained a proliferation activity, expressing however, both CK1 and CK18 in the early days of culture, as a result of their incomplete terminally differentiated state. This morpho-functional behaviour is more similar to that belonging to keratinocytes in granulosum and lucidum layers of the in vivo epidermis, underneath the outermost corneum layer.

PCL membrane, thanks to mechanical properties similar to those exhibited by the natural dermis, a moderate surface wettability and roughness, limited the cell spreading and favoured a morphological behaviour more similar to the cells of the basal lamina. On PCL membrane, human keratinocytes were maintained in a round-shape and in proliferating activity, like the cells in the basal lamina of the in vivo epidermis. Cells proliferated without reaching their terminal differentiation up to 14 days of culture, as evidenced also by their lower expression of CK1. Over time, the sustained proliferation engendered the stratification of multilayered cells so that after 21 days a complete proliferative and migratory differentiating bioartificial epidermal substitute was created on the PCL membrane.

The overall results demonstrated that specific epidermal strata can be engineered by using membranes with suitable properties. The developed specific epidermal membrane systems can be used as a tool for in vitro evaluation of diseases and physiological ageing, as well as for testing percutaneous adsorption, accumulation and/or toxicity of drugs, cosmetics and pollutants along the different epidermal layers.