Super-resolution in live cells: Visualizing the molecular organization of the cell division machinery

We set out to elucidate the molecular organization of the proteins of the cytokinetic apparatus, an essential step to understanding the mechanism of cell division. Cytokinesis is best understood in the single cell model organism fission yeast. Fluorescence confocal microscopy in live fission yeast cells played a pivotal role in identifying proteins involved in cytokinesis, counting the numbers of these proteins and delineating the timeline of events leading to cell division. In this model organism, the cytokinetic contractile ring assembles by the coalescence of nodes, protein assemblies containing multiple structural and regulatory proteins. Do these proteins colocalize in nodes or does each protein populate different subsets of nodes? Are proteins organized into a basic unit for force generation or are they randomly distributed within the cytokinetic apparatus? Are the nodes the basic functional units of the contractile apparatus in fission yeast? Do mitotic proteins remain organized into a higher order structure during contractile ring constriction? 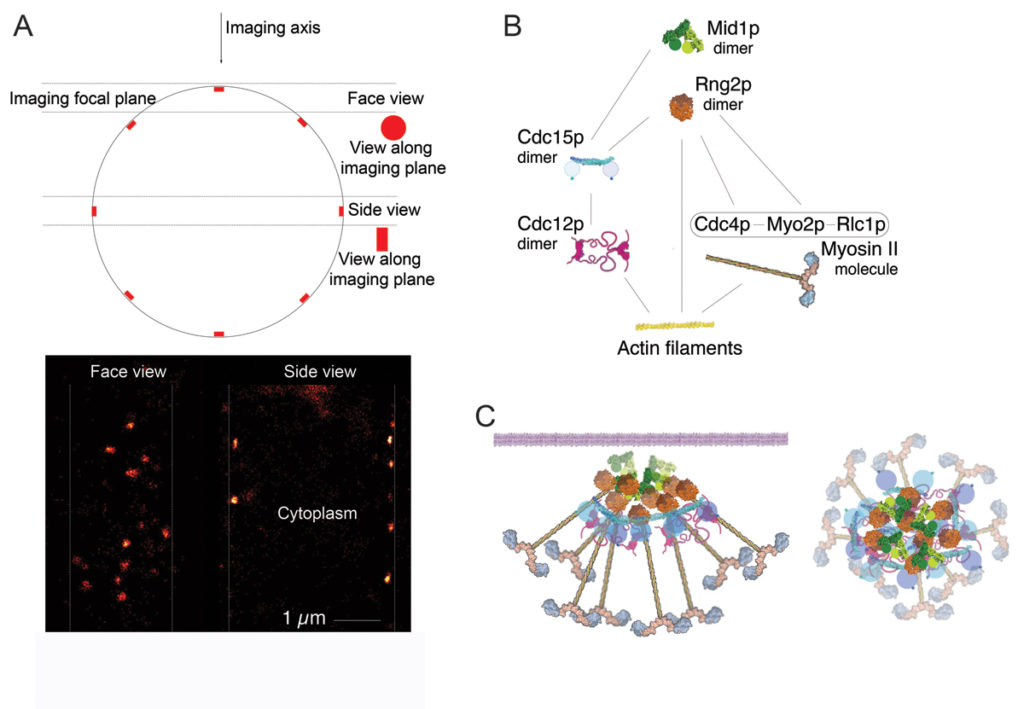 Fig. 1. Molecular model of mitotic node proteins. (A) Diagram of a cross-section of a fission yeast cell with the different views of an object obtained by focusing on the surface or the middle of a cell and (Lower) the FPALM reconstruction images of nodes in face and side views. (B) Schematic of known node protein interactions (C) Schematic scale model summarizing the locations of six proteins in cytokinesis nodes in a side view (Left) and a face view from the top of the cell (Right).

We addressed these questions with high-speed fluorescence photoactivation localization microscopy (FPALM) of live fission yeast cells and obtained images at ~35 nm resolution, an approximate tenfold improvement in resolution over confocal fluorescence microscopy. We tagged cytokinesis proteins in the genome with the photoactivatable fluorescent protein mEos3.2. We placed these tags on eight different sites on six highly conserved cytokinesis proteins: the anillin homolog Mid1p, the F-BAR domain containing protein Cdc15p, the formin Cdc12p, the IQGAP protein Rng2p, the myosin-II heavy chain Myo2p and its regulatory light chain Rlc1p. We imaged live cells expressing either a single tagged protein or pairs of tagged proteins. We obtained en face or in side views of nodes by focusing on the surface or the middle section of the cells to provide two points of view (Fig. 1A). We imaged individual photoactivated mEos3.2 molecules and precisely localized the source of each of these single molecule emissions both in space and time. We built critical analysis tools to measure dimensions and shape of protein clusters, count the number of localized emitters per protein cluster and to take advantage of the quantitative potential of the thousands of single molecule localizations acquired in our datasets.

The distinct distributions of eight different mEos3.2 tags in nodes demonstrate that nodes are discrete structures containing all six proteins. We propose a three-dimensional model for the arrangement of proteins in nodes constrained by the number of each protein, the shapes and sizes of the proteins from electron microscopy and x-ray crystallography, the positions of the mEos3.2 localizations relative to the cell edge, and the established interactions among the proteins (Fig. 1B,C).

In our model anillin/Mid1p is located at the core of the node close to the plasma membrane. IQGAP/Rng2p links Mid1p to the end of the Myo2 tails. The F-BAR protein Cdc15p links Mid1p to formin Cdc12p. Anchoring Myo2 tails to core proteins creates a motor unit geometrically equivalent to bipolar myosin-II filaments of animals and amoebas, but with radial symmetry. This bouquet arrangement of Myo2 allows the heads to fan out into the cytoplasm where they can capture actin filaments during contractile ring formation and constriction.

The higher resolution offered by FPALM also revealed that nodes persist in contractile rings, where they move bidirectionally around the circumference of the ring as it constricts.

Quantitative imaging of live cells by FPALM is a powerful approach for studying dynamic cellular systems at the nanoscale level. Knowing the spatial organization of proteins within multiprotein complexes clarifies the role and biological functions of each constituent protein. The discovery that cytokinetic proteins are organized into discrete functional units in fission yeast provides some clues relevant to the organization of cytokinetic rings in other organisms.