The parasitic disease sparganosis is a form of cutaneous larva migrans and caused by larval tapeworms of the genus Spirometra. The life cycle of Spirometra includes two intermediate hosts, and adult worms parasitize the intestines of carnivorous mammals, such as dogs and cats. Humans become infected following the ingestion of larvae in the raw meat of second intermediate or paratenic hosts, such as frogs, snakes, and chickens. Previous studies suggested that dissolution of the larval body in the host’s gastrointestinal tract, penetration of the larval head into the intestinal wall, and migration into subcutaneous tissues, in which larvae cause local inflammation, are important processes for the progression of sparganosis.  However, the molecules underlying these processes have yet to be identified. 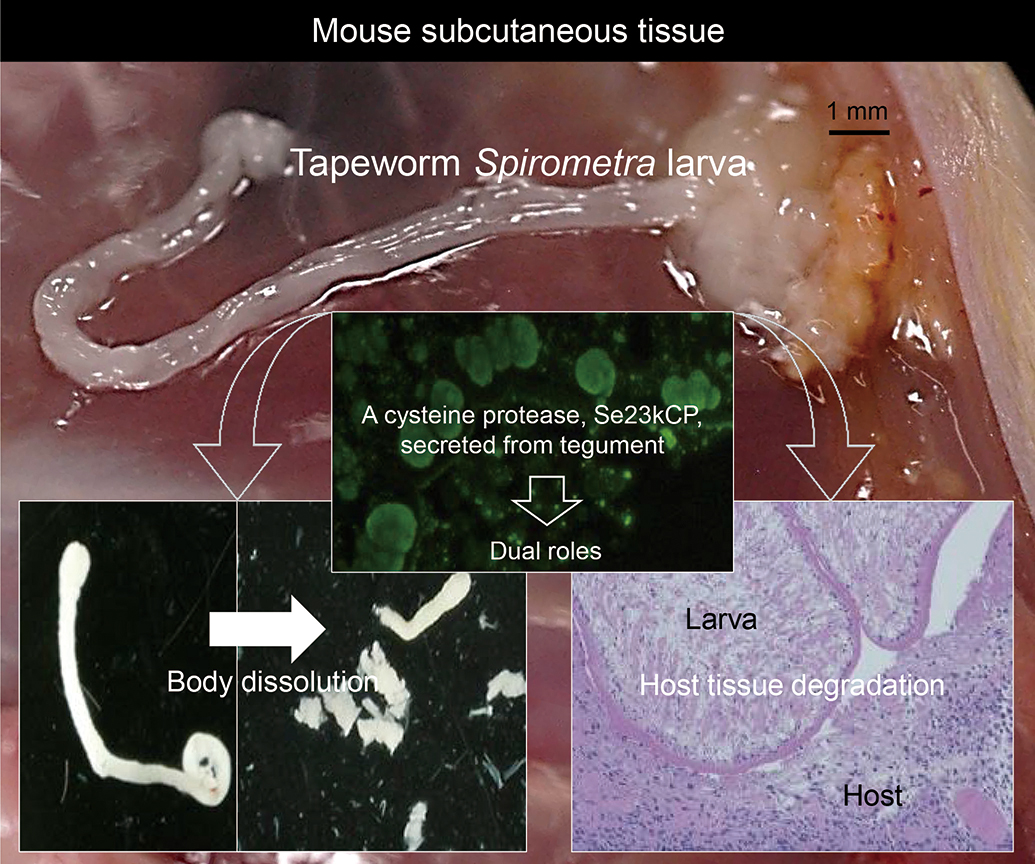 Fig. 1. A cysteine protease (Se23kCP) from the larva of Spirometra tapeworm plays a critical dual role for larva migrans. Se23kCP secreted from larval tegumental vacuoles dissolves its body region, allowing invasion into the host intestinal wall and degrades host tissues, allowing migration and residence in host subcutaneous tissues. Se23kCP may be an essential molecule for the onset and progression of sparganosis.

In the present study, we revealed the enzymatic and histological properties as well as pathophysiological functions of the native 23-kDa cysteine protease (Se23kCP) extracted from Spirometra larvae; however, Se23kCP was hardly detectable in adult worms. Se23kCP is a mature protease consisting of 216 amino acids and shows high sequence similarity with cathepsin L in various organisms, including humans, mice, and nematodes. Se23kCP exhibits wide substrate specificity, indicating its cysteine and serine protease activities. Endogenous Se23kCP localizes in the tegumental and parenchymal tissues of larvae and is aggressively secreted from vacuoles into host subcutaneous tissues, which are partially degraded. Se23kCP has the ability to proteolyze the human structural proteins fibronectin and collagen, the degradation of which is needed for tissue migration by larvae, at physiological pH and temperature. Since the dissolution of the larval body is an important process for penetration into the intestinal wall, the contribution of Se23kCP to this process was assessed. The larval body region, but not head region, dissolved under acidic conditions. A cysteine protease inhibitor and anti-Se23kCP sera completely inhibited body dissolution. In addition, most larval heads retained infectivity after body dissolution. Our results indicate that Se23kCP plays dual roles in host tissue degradation and larval body dissolution processes.

Se23kCP activity under neutral conditions appears to be important for tissue degradation as host subcutaneous tissues, in which larvae reside and migrate, provide a neutral environment. Since Se23kCP lyses the larval body under acidic conditions, the bodies of larvae exposed to acidic physiological environments, such as gastric acid in the host stomach, may be readily dissolved by Se23kCP. The present results emphasize a dual role for Se23kCP not only in host tissue degradation, allowing larval migration and residence in host subcutaneous tissues, but also in casting off the body region, thereby allowing invasion into the host intestinal wall.  Therefore, Se23kCP secreted primarily from Spirometra larvae may be an essential molecule for the onset and progression of sparganosis. Se23kCP has been used as a serological antigen for the diagnosis of sparganosis. It may provide a useful vaccine and anthelmintic target because of its profound contribution to the physiology of the life cycle of Spirometra tapeworms.