“Tapping” your way to health

In this age of stress and distress, what if I told you that you could communicate with your nervous system directly to reduce the stress hormones that are circulating in your blood stream, the very same stress hormones that lead to pain, arthritis, diabetes, heart disease, migraine, anxiety, depression and so much more? And all without a prescription. Sound too good to be true? Think again.

For over twenty years, Gary Craig has been developing a technique he calls The Emotional Freedom Technique (www.emofree.com) or ‘tapping’ that he has been teaching thousands of people in order to obtain relief from symptoms that the sympathetic nervous system ( read ‘stress’ nervous system) triggers. A combination of cognitive or mental therapy and traditional Chinese Medicine, this technique is easy to learn and use on a daily basis. 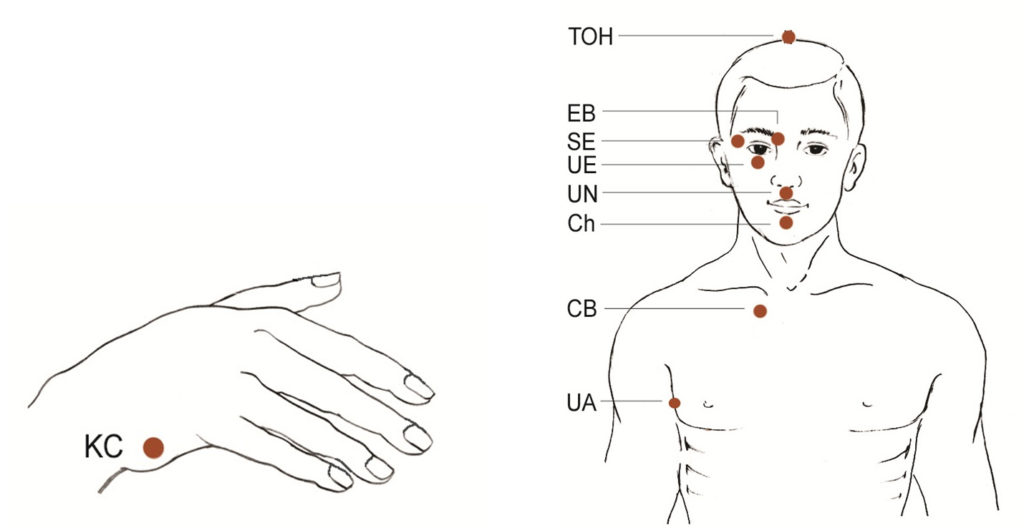 The patient holds the troubling symptom in his/her conscious awareness, and then by ‘tapping’ on specific acupoints, mostly on the head and upper torso, the patient can recondition the sympathetic nervous system to reduce its over-reaction to specific triggers. Acupoints are those points along meridians or energy channels that acupuncturists use to release disturbances in the healthy flow of energy. Instead of using needles however, stimulation of the points occurs by tapping on the selected acupoints using one’s fingers.

If this sounds crazy, think again. Over sixty articles in research journals give tapping a 98% effectiveness rate. It is being used successfully to deal with academic and athletic performance issues such as performance anxiety, physical conditions such as pain, psoriasis, seizure disorders, fibromyalgia, and migraine, and mental/emotional conditions such as anxiety, addictions, depression, post-traumatic stress disorder, dyslexia, weight loss and cravings, phobias, and fear of public speaking – all to name but a few. The following illustration provides information on the ‘tapping’ points. 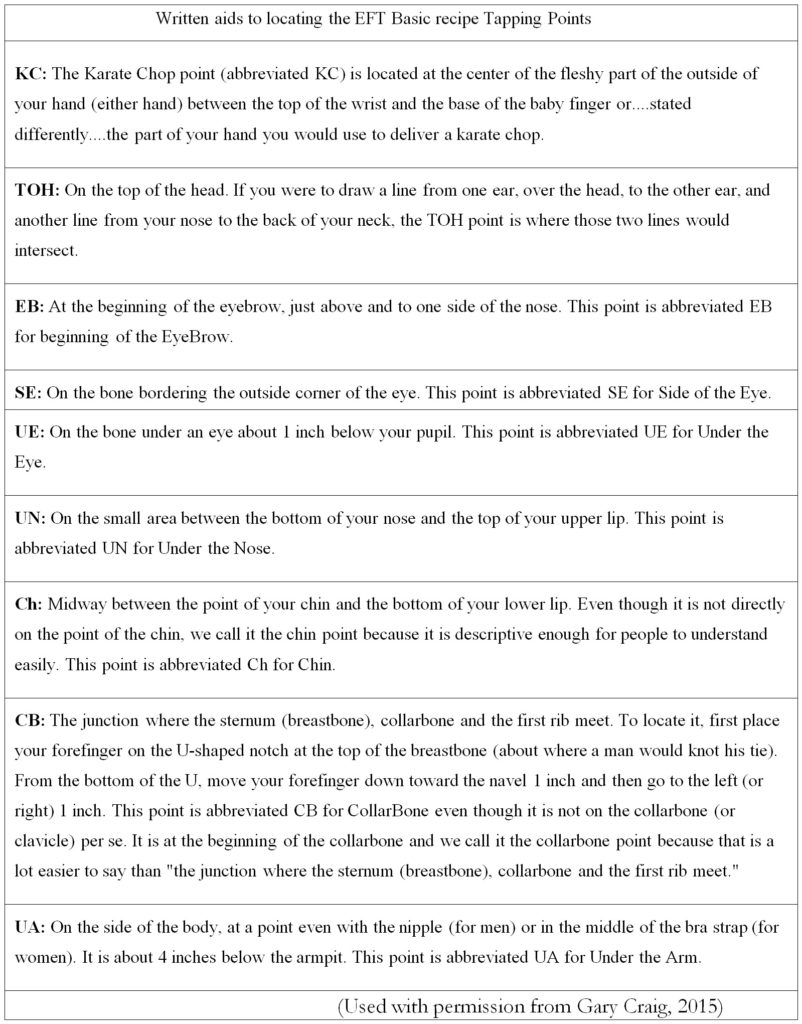 It is thought that thinking about the triggering issue sends an impulse to the amygdala, or the threat arousal area, in the brain that activates the fight-flight-freeze response. Stimulating the acupoints deactivates the arousal while the trigger is experienced. The hippocampus, another part of the arousal network in the brain, notes that the trigger can be safely experienced without a stress response and the de-activated neural pathway becomes normalized.

For example, if I have a migraine headache, I would rate the headache on a scale of 0-10 scale with 10 being the worst pain I can imagine. While tapping on the karate chop acupoint, I might say, “Even though I have a migraine headache I rate as a 9 on a scale of 0-10, I still completely and deeply accept myself.” As I continue to tap down throughout the rest of the acupoints, I might summarize this by making statements such as “migraine pain at a 9,” “feeling so stressed at work,” “finding it hard to cope,” etc. At the end of every tap-down, I re-evaluate my symptoms, and continue to ‘tap’ them down until I reach a negligible value.

Of course, it can be more complicated than this example, however, this does give you a feel for the technique. To learn more about how to use it or to find a skilled practitioner in your area, you are invited to review Craig’s excellent online tutorial at the above website.

The Emotional Freedom Technique: Finally, a Unifying Theory for the Practice of Holistic Nursing, or Too Good to Be True?
Rancour P
J Holist Nurs. 2016 May 11