The aptamer BC007: for the treatment of “functional autoantibody diseases”. First developed for patients with dilated cardiomyopathy

Autoimmunity is accepted as the origin or amplifier of various diseases. In the mid-1970s, a new class of “so-called” functional autoantibodies that bind to G-protein-coupled receptors (GPCR-AABs) was identified for downstream pathologies. The related “functional autoantibody diseases” – most prominently cardiomyopathies and especially dilated cardiomyopathy – would, as all of the other diseases listed in Figure 1, profit from GPCR-AAB-targeted therapy.

Fig. 1. Diseases with properties of functional autoantibody diseases: their autoantibodies directed against G-protein coupled receptors potentially targets for treatment such as application of the aptamer BC007 for in vivo inhibition (n.d. – not determined, n.t. – not tested).

DCM patients present with GPCR-AABs directed against beta1-adrenergic (β1-AABs) and muscarinic 2-receptors (M2-AABs), whose pathogenic potency was proven. Comorbidities like diabetes mellitus and hypertension can add GPCR-AABs directed against α1-adrenergic, angiotensin-1 and endothelin-A receptors, thus expanding the patient’s GPCR-AAB pattern. Figure 2A-C illustrates for β1-AABs how GPCR-AABs drive the pathogenesis of DCM. As generally seen for GPCR-AABs, β1-AAB receptor binding results in receptor dimerization, which is the reason for the uncontrolled long-term receptor stimulation which causes heart pathologies. 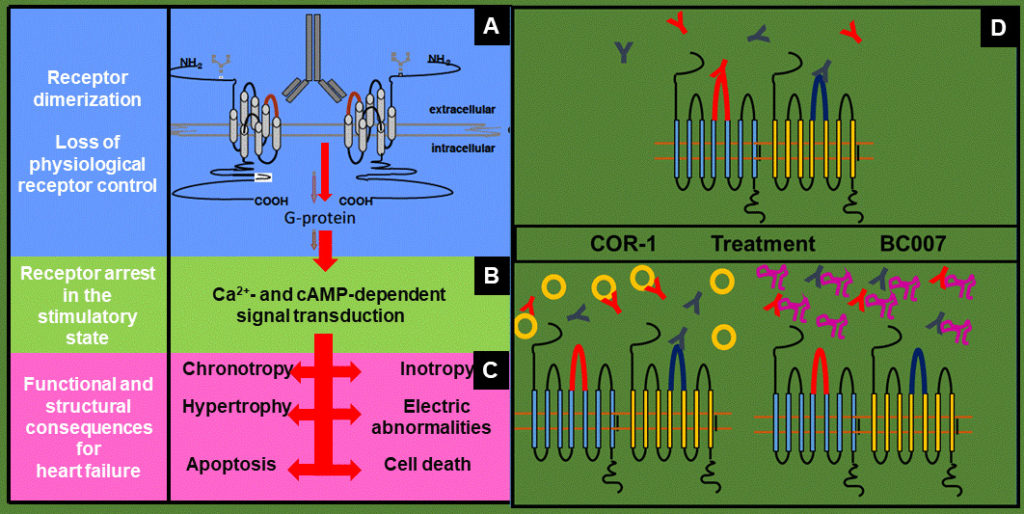 Fig. 2. View on functional autoantibody diseases induced by autoantibodies directed against G-protein-coupled receptors (A-C) and strategies (D) to counteract, demonstrated for cardiomyopathy and autoantibodies directed against β1-adrenergic receptors (b1-AABs). 2A: GPCR-AAB cross-links two receptors for activation, which block receptor desensitization and down-regulation in parallel for activity control. 2B: Permanent activation of “physiologic” second messenger mechanisms. 2C: Activation of cellular mechanisms for functional and structural cell and tissue alterations. 2D: Typically, several GPCR-AABs are present in patients with functional autoantibody diseases, such as b1-AAB (Y) and M2-AAB (Y) in DCM. The binding of both GPCR-AABs (top) to their receptors in the absence (above) and presence (below) of drugs for GPCR-AAB inhibition: peptide COR-1 ( left side) binds to the autoantibodies’ high variable region (CDRs) and can therefore only bind the β1-AABs, but none of the other GPCR-AABs (e.g. M2-AABs). BC007 ( right side) binds to autoantibodies outside of the CDRs, but to a conserved region present in most different GPCR-AABs, and can therefore bind all of these GPCR-AABs in addition to β1-AABs, outperforming the peptide concept.

As the strongest evidence for GPCR-AABs’ pathogenic potency, the outcome analysis performed in DCM patients after the removal of their GPCR-AABs by immunoadsorption (indicated by the β1-AAB loss) demonstrated a significantly increased five year survival rate for immunoadsorbed  GPCR-AAB-positive patients vs. conventionally treated patients (Dandel M. et al. Eur J Heart Fail 2012;14:1374-1388[i]). Unfortunately, GPCR-AAB removal by immunoadsorption is cost-intensive and accompanied by logistic problems and patient burden, which restrict its extensive use.

To overcome the restriction, two alternatives for targeting GPCR-AABs in the blood are realistic: 1st, the inhibition of GPCR-AAB generation (intravenous IgG treatment (IVIG), B cell depletion), but “pros” and probably even more “cons” were published for this strategy; and 2nd, the application of drugs binding GPCR-AABs for their inhibition such as peptides that compete with the receptor for related GPCR-AABs or aptamers as “chemical antibodies” that inhibit GPCR-AABs. In the peptide concept, a specific peptide must be designed for each of the GPCR-AABs, such as COR-1 (further clinical developments were halted due to adverse effects) for β1-AABs and even only for the proportion of β1-AABs targeting the second receptor loop. In contrast, the aptamer BC007 is currently on its way to patients. This aptamer inhibits all GPCR-AABs listed in Figure 1, thus outperforming the peptide concept, as illustrated in Figure 2D for DCM patients positive for β1- and M2-AABs.

Aptamers, like all oligonucleotides, such as BC007, show low toxicity and immunogenicity, and can – if necessary – be easily modified for in vivo protection and stability and for the control of pharmacokinetic and pharmacodynamic properties. Aptamers possess heat stability which is important for sterilization, transportation and storage. As anti-dots, complementary oligonucleotides can easily be designed, making aptamers preferred for therapeutic use.

We are convinced that BC007 could be used in general for the treatment of functional autoantibody disease. However, our main focus is presently to pave the way for BC007 to become a drug specifically for GPCR-AABs neutralization in patients with DCM. Firstly, we demonstrate that the in vivo GPCR-AAB neutralizing potency of BC007 in β1-AAB positive rats that responded to BC007 treatment with a strong reduction in the β1-AAB titer which did not substantially return in the follow-up after three months. Any signs of BC007 toxicity were lacking. (Wallukat G. et al. Atherosclerosis 2016;244:44-47). Thereafter, all regulatory requirements for preclinical investigations were successfully completed in order to prepare the BC007 phase 1 clinical trial. No morphologic, histologic, neurologic, pulmonary or cardiologic side effects were noted in dogs or rats. The phase 1 clinical trial of BC007 is currently underway with data being expected in the first quarter of 2018 (ClinicalTrials.gov: NCT02955420).

Considering the pioneering work in autoimmunity-compromised DCM patients, BC007 should be kept in mind for the other diseases indicated in Figure 1.