The birth of neurons, steered by the antenna of the cell

Millions of neurons that constitute the human nervous system are generated during fetal development from stem cells that reside at the ventricle, a liquid-filled space found deep within the brain. How the fate of a stem cell is directed toward a specific neuronal subtype, serving a precise function in a network of myriad other neurons, is a question of fundamental interest and clinical importance, as mistakes in the process can lead to congenital disorders. The research laboratories of Dr. Sandra Blaess of the University of Bonn, Germany, and of Dr. Kerry L. Tucker of the University of New England in Biddeford, Maine, U.S.A., teamed up to look at the development of a neuronal subtype of huge importance for normal function. The dopaminergic neurons of the substantia nigra and ventral tegmental area lie in the midbrain, a small structure tucked underneath the massive lobes of the cerebral cortex. These neurons integrate into a network that communicates with many other brain regions, most importantly the striatum, nucleus accumbens, and prefrontal cortex, to coordinate the progression of tasks involving reward behavior and motor and cognitive function. Imbalances in the dopaminergic system have been implicated in several psychiatric diseases, while degeneration of these neurons leads to the debilitating defects seen in Parkinson’s disease. 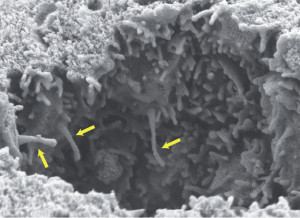 The laboratories used multiple genetically-engineered mouse models to show that the primary cilium, a cellular organelle, is essential for normal development of this neuronal population. The primary cilium is a tiny fingerlike protrusion jutting out of the cell body of the neural stem cells that generate dopaminergic neurons (Fig. 1). Primary cilia have been shown by many laboratories to orchestrate complicated developmental signaling pathways. In particular, the authors were interested to see if a secreted growth factor called Sonic hedgehog (Shh), which is known to be important for the development of the dopaminergic neurons, was exerting its effect through actions at the primary cilium.

The two teams analyzed mutant mouse lines deficient in the gene encoding intraflagellar transport protein IFT88, a protein that is critical for primary cilia function. Inactivation of Ift88 in the embryonic midbrain midway through pregnancy resulted in a progressive loss of primary cilia and a reduction in dopaminergic neurons (Fig. 2). The authors identified Shh signaling as the primary cause of these defects, using two separate experimental approaches. In the first, they examined mice in which the genes Gli2 and Gli3 were ablated in the midbrain. These two genes encode DNA-binding transcription factors that together mediate Shh signaling in the receiving cell. Examination of these double mutants yielded a result basically identical to the one seen in the Ift88 mutants. In the second approach, a mouse line was examined that overexpresses a mutant form of the Shh receptor Smoothened. Normally this leads to a massive activation of the Shh signaling cascade/pathway, but in the absence of primary cilia, this did not occur. This classic form of genetic analysis shows that the Smoothened receptor lies in a genetic pathway upstream of the Ift88 gene. This strongly implies that primary cilia are absolutely necessary for the effects caused by Shh.

Fig. 2. Loss of dopaminergic neurons, indicated by yellow arrows, in the embryonic midbrain of a Ift88 mutant mouse, compared to normal numbers in a normal wildtype (WT) brain.

With this elegant approach, the authors were able to identify for the first time a crucial role of primary cilia in the induction of dopaminergic neuronal progenitors. They thereby defined a narrow time window in which Shh-mediated signaling is dependent upon normal primary cilia function. The ciliopathies define a broad spectrum of disease aspects that include specific, subtle defects in brain development. This research suggests that defects in the dopaminergic system may also be manifesting in these patients, and indicate a very specific mechanism for how they may arise.