The dual role of mercury on mitochondrial complexes by sulfur bridges

All forms of mercury are long known to be highly toxic. In recent years, the metal occurrence in dental amalgams has raised worries for the harmful effects due to the slow mercury release in the human body. Mercury poisons primarily the brain but it also acts on other body districts such as the lungs, the kidney and the heart. Within the cell, mitochondria are among the preferred targets of mercury, but, quite surprisingly, up to now the metal impact on mitochondrial bioenergetics has been poorly explored. 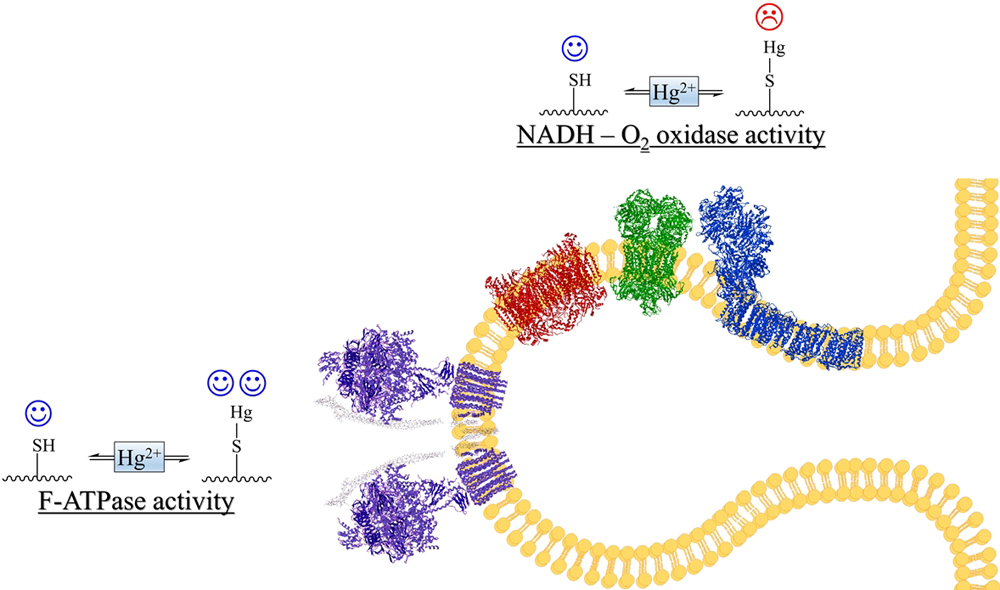 It is widely known that mercury, and particularly the divalent cationic form Hg2+, is a mitochondrial toxin, which inhibits the mitochondrial respiratory chain, the basic process of electron transport coupled to proton pumping in the intermembrane space exploited by all aerobic organisms, from bacteria to humans, to obtain energy and live. In other words, if is well known that mercury attacks the vital engine of cells, its effects on the individual mitochondrial complexes are not so clear. Our recent study points out that in swine heart mitochondria Hg2+ exploits the same chemical mechanism to produce different effects on the mitochondrial complexes. Briefly, Hg2+ inhibits the mitochondrial respiration when the substrate is NADH, while it is ineffective when the substrate is succinate. This means that Hg2+ primarily acts on Complex I, the first proton pumping mechanism of the respiratory chain. Interestingly, the same micromolar Hg2+ doses which depress Complex I, stimulate the F-ATPase activity, namely the enzyme complex which, under “normal” conditions exploits the proton gradient built by the respiratory chain to form ATP, the energy currency of the cell. The experimental evidence gathered in our work clearly indicates that Hg2+ reacts with the cysteine residues of respiratory complexes. The amino acid cysteine plays a key role as redox sensor and protein modulator. By binding to the thiol sulfur of cysteine, mercury oxidizes the sulfhydryl groups and forms a metal-sulfur bridge within mitochondrial proteins. Through this mechanism, mercury causes conformational changes in the protein, which result in either enzyme inhibition (Complex I) or enzyme stimulation (F-ATPase). Intriguingly, this thiol-based mechanism can be seen as a molecular strategy to quench mercury damage to mitochondria. Accordingly, if the F-ATPase activity is sustained under conditions which inhibit Complex I, the electrochemical gradient between the two sides of inner mitochondrial membrane could be somehow maintained. When the membrane tends to be depolarized (inhibition of respiration and proton pumping by respiratory complexes) the F-ATPase, working in reverse, hydrolyzes ATP and pumps protons from the mitochondrial matrix to the intermembrane space to re-energize the membrane. By this combined opposite modulation, mitochondria could be somehow resilient to mercury poisoning, since mercury damage on the respiratory chain (inhibition of respiration) would be counteracted to some extent (maintenance of the transmembrane gradient) by ATP hydrolysis.