The effect of motherhood and work on women’s time pressure

Deadlines, time pressure, stress, and hustle: Who has not experienced the mad rush of a hectic day? Time pressure ─ also referred to as time crunch, time squeeze, or time deprivation ─ is a widespread phenomenon in accelerated Western societies. There is also evidence that time pressure has become more prevalent in recent decades. Whereas time is considered an important dimension of well-being and overall life satisfaction, perceptions of time pressure and stress can be associated with adverse physical and mental consequences, including such threats to well-being as distress, depression, sleep disorders, accelerated aging, and increased risk of diabetes. The amount of time that people see as available to them also influences their lifestyles, including diet, eating habits, and physical activity. As a result, time pressure may have important public health implications. 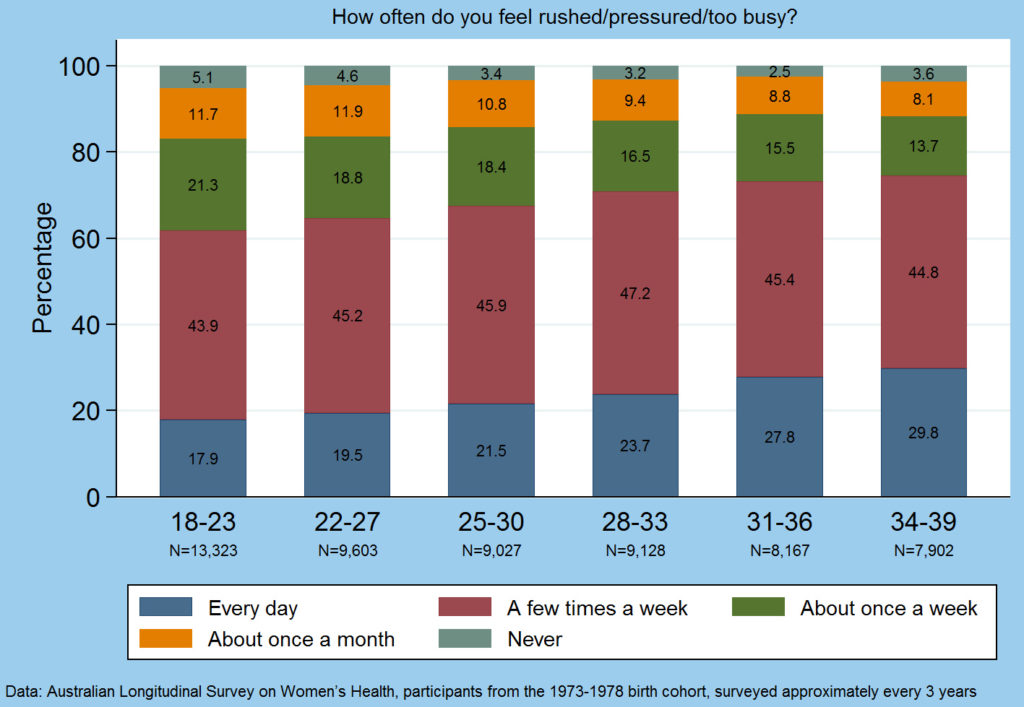 We investigate this topic by analyzing nationally representative information from six consecutive waves of the Australian Longitudinal Study on Women’s Health (ALSWH) to measure the amount of time pressure experienced by women born between 1973 and 1978. We follow these women across 17 years of different life stages—from the age bracket when people are most likely to finish school or university and start working  to marriage, parenthood, and child care — with particular attention to the effects of motherhood and work.

We find that more than two thirds of the women studied felt intense time pressure, which increased substantially over the 17-year period (Fig. 1). The proportion of women experiencing time stress every day increased from 18% in 1996 (at ages 18-23) to 30% in 2012 (at ages 34-39). As the comparison of women with and without children shows (Fig. 2), motherhood appears to be associated with higher levels of time pressure. Time stress is also significantly linked to a number of personal, family, and work characteristics, including number and age of children, economic insecurity including financial difficulties and concern about employment stability, and the length of the working week.

We also show that time stress increases as the age of the youngest child increases to primary school age (5 – <12 years). This increase reflects the likelihood that older children will participate in, and need help with, extracurricular activities, including transportation to and from school. Once the youngest child reaches high school age (12+ years), time stress decreases slightly as he or she becomes more independent and able to self-manage activities. When the mother is also employed, the time stress burden is doubled: as both mother and wage earner, she must fulfill work and family obligations simultaneously. Remarkably, even though a partner might be expected to loosen the time constraints and reduce the pressure by contributing something to household chores and income, in fact, having a partner seems to have no effect on women´s time pressure. 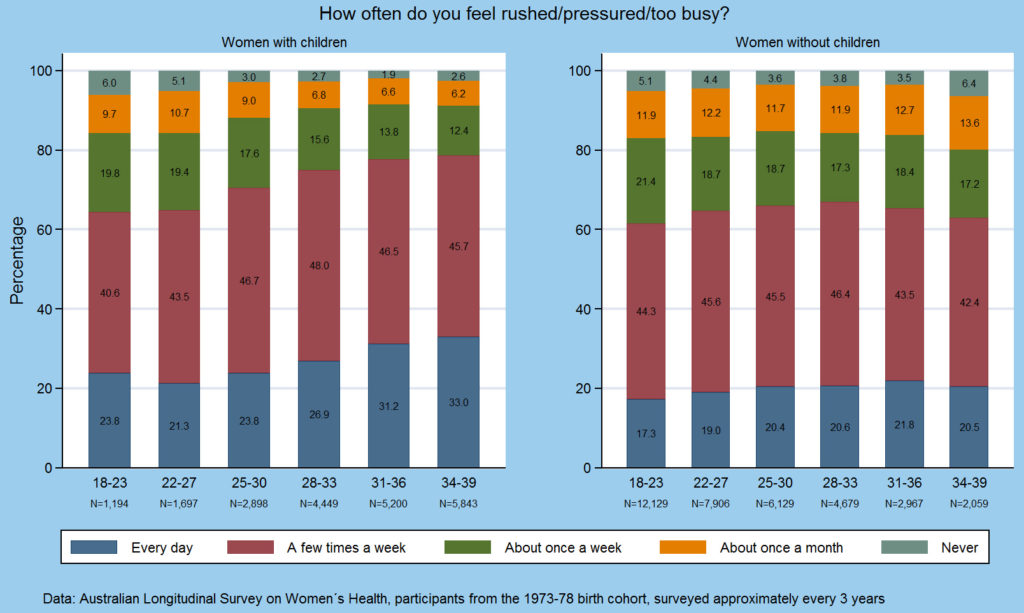 By painting a clear picture of how the multiple roles of being a mother, wage earner, and caregiver lead to time stress, our study highlights the impact of being too rushed and time pressured on our physical and mental health and well-being. The amount of time stress it finds also emphasizes the importance of identifying ways for people to balance these competing pressures as patterns of labor market participation change, economic insecurity grows, society and the workforce age, and chronic disease increases.