The hepatopancreas of decapod crustaceans, a particularly complex and dynamic invertebrate organ

The hepatopancreas is the largest organ of the digestive tract and metabolic centre of the ~15,000 species of decapod crustaceans that include shrimps, crabs, lobsters and crayfishes. A review of my own data and literature data revealed that the hepatopancreas is structurally and functionally among the most complex invertebrate organs. Moreover, it responds dynamically to specific life history conditions, changes of food and water quality, and diseases. 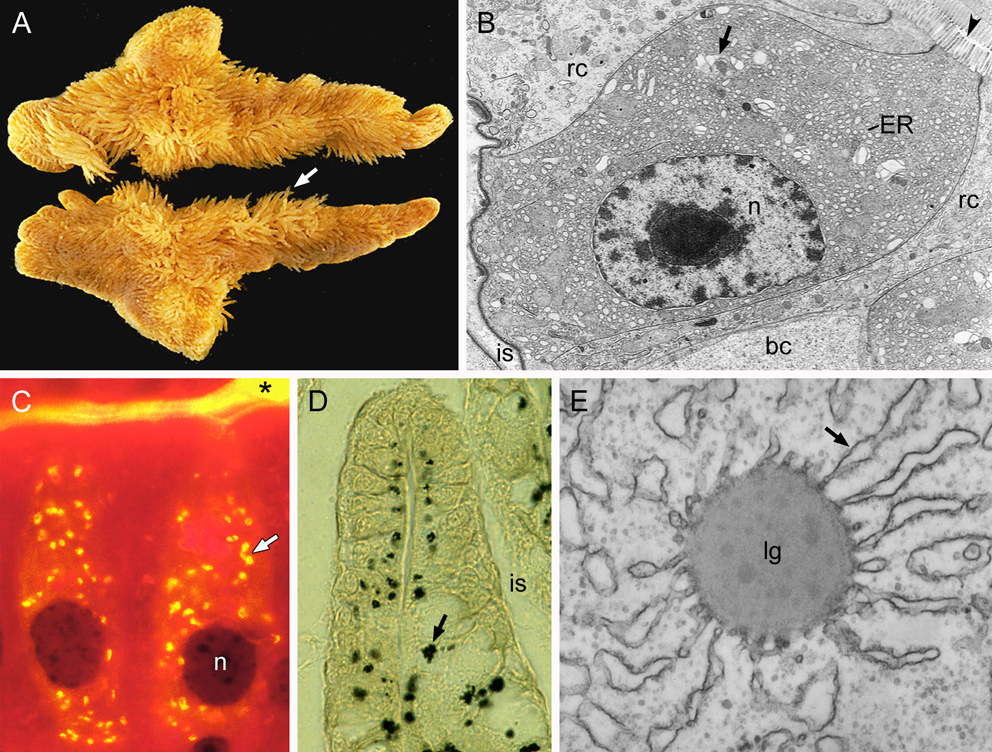 The hepatopancreas is a bi-lobed organ consisting of hundreds of blindly ending tubules (Fig. 1A). Each tubule is enveloped by a muscle net composed of longitudinal and circular fibres. Stem cells (E-cells) at the distal ends of the tubules give rise to three ultrastructurally different epithelial cell types, the R-, F- and B-cells. Microtomography, electron microscopy, histochemistry, immunohistochemistry, in situ hybridization, transcriptomics, and monitoring of ultrastructural changes under different experimental conditions allowed the attribution of functions to these cell types. F-cells (Fig. 1B) synthesize digestive enzymes (Fig. 1C) and blood proteins involved in oxygen transport and immune defence. They also detoxify organic xenobiotics and some heavy metals. R-cells serve for the absorption and metabolization of nutrients, storage and catabolism of energy reserves like lipid globules (Fig. 1E) and glycogen fields, synthesis of lipoproteins for export to other organs, detoxification of heavy metals (Fig. 1D), and excretion of uric acid in terrestrial species. B-cells are assumed to produce and recycle fat emulsifiers. Interestingly, the hepatopancreas tubules lack nerves. The presence of scattered M-cells with putative endocrine function in the epithelium suggests that the hepatopancreas is hormonally controlled. The M-cells probably represent a self-perpetuating cell lineage independent from E-cells. The interstitial spaces between the tubules contain connective tissue, arterioles, haemolymph with haemocytes, and fixed phagocytes.

The hepatopancreas is also an important organ of immune defence. It constitutively secretes pathogen-recognition molecules such as LPS and β-1,3-glucan-binding protein and antimicrobial compounds like lectins, lysozym and serine protease-inhibitor into the haemolymph. It also provides the energy required for the fight against pathogens elsewhere in the body. The fixed phagocytes that reside along the arterioles in the intertubular spaces phagocytose all foreign material, particularly viruses and bacteria. They capture pathogens that escape from infected hepatopancreas tubules into the haemolymph or enter the body elsewhere and reach the hepatopancreas via the circulation.

The nutrient storing R-cells of the hepatopancreas show dynamic structural adaptations particularly during the moult cycle, vitellogenesis, and starvation, which are regularly recurring energy-demanding processes. The F-cells respond to pollution of the water with organic toxicants with proliferation of the rough endoplasmic reticulum, reflecting detoxification mechanisms. Heavy metal pollution results in the formation of detoxification granules in R-cells (Fig. 1D) and F-cells, depending on species, metal and route of administration.

The investigation of species from different higher taxa revealed that the hepatopancreas is structurally and functionally relatively uniform throughout the Decapoda, despite their broad variety in body size, morphology, life style, and ecology. However, there are a few exceptions in species from extreme environments. For example, the shrimp Troglocaris anophthalmus from the underground of the Dinarian karst in Slovenia and Croatia has evolved large lipid storing compartments named oleospheres. These oleospheres are transformed parts of the distal portion of the hepatopancreatic tubules and contain an oily fluid. Laboratory experiments revealed that shrimps with filled oleospheres can survive 27 month without feeding. Therefore, the oleospheres are interpreted as an adaptation to the nutrient-poor cave environment. Another interesting transformation of the hepatopancreas is known from deep sea shrimps of the genus Eusergestes, which use groups of modified hepatopancreas tubules as bioluminescent organs. These tubules are composed of light producing and light reflecting cells. They emit a bluish-green light for counter-illumination.