In the last 20 years, middle ear implants have joined conventional external hearing aids in the rehabilitation of the hearing loss. Middle ear implants solve some typical hearing aid problems such as feedback, signal distortion, or occlusion of the external auditory canal and can work despite clinical problems such as malformation of the external ear or chronic skin infections. Whereas hearing aids provide sounds amplification through the outer and middle ear, the implantable prostheses bypass the outer ear, making the ossicles vibrate directly. These devices can be partially or totally implantable depending on the location of the microphone and processor. A commercially available fully implantable device is the Carina system (Cochlear Ltd, Sydney, Australia), used for acoustic rehabilitation in adults (Fig. 1). The Carina is composed by a microphone, processor and rechargeable battery; all of those parts are implanted into the petrous bone under the retroauricular soft tissue, solution that is aesthetically pleasing and can be used in sports activities such as swimming. The microphone collects sound and sends it to the processor: the signal is amplified, processed and send to the actuator. At the stage the electrical signal is traduced in a mechanical movement that will be transmitted to the ossicles or to the labyrinthine fluids (the transducer could be coupled with the stapes, the round window or oval window). The programming system has software that controls and changes the settings of the processor implanted via telemetry system similar to that of cochlear implants. 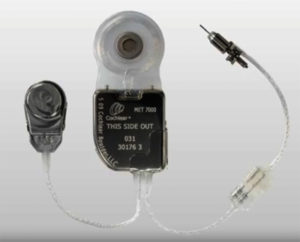 On hospital admission, patients received a comprehensive otological, audiologic and radiologic evaluation. The surgical technique was designed for each patient: a retroauricolar access was created with an extended Wilde incision or an inverted Italic S skin incision and a flap of the posterior auricular muscles. The device was placed in a temporoparietal bony bed, which was drilled under the temporal muscle. Then the transducer was coupled with incus (28 ears), oval window (2 ears) or round window (2 ears). The correct coupling is critical for the device’s performance: insufficient pressure of the transducer restricts the transfer of energy to the ossicles and cochlea, whereas excessive pressure can cause cochlear damage. None of the patients had any permanent or temporary paralysis of the facial nerve; in two implants on the round window, the chorda tympani were sectioned. Nearly all patients reported feedback problems, solved with software adjustment. Reintervention was required in 7 patients (ears): 4 patients experienced displaced part of the device (1 for an accidental head trauma), 2 dehiscence of the skin over the microphone, 1 a major infection. 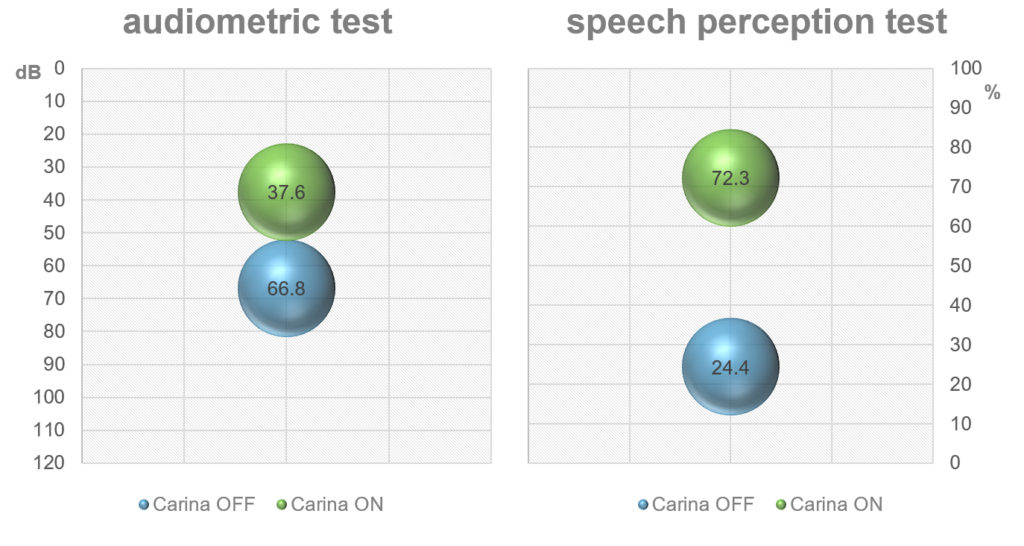 The tonal audiometric results initially lacked a statistically significant variation in the average pre and postoperative bone conduction. This result confirmed that coupling of the transducer does not damage the cochlea or change the ossicular chain’s vibration ability. Audiological examinations demonstrate valid functional gain and significant improvement of speech perception in quiet (Fig. 2). Most implanted patients express a high degree of satisfaction with the prosthesis, which highlights improved hearing in different environmental conditions, cosmetic advantages, and greater freedom in performing common activities in daily living. Based on this experience, bilateral implantation—even simultaneously—is a viable option for selected, motivated patients because the intervention is generally well tolerated and surgery time is relatively fast.