Viruses that are transmitted between vertebrate hosts by biting, blood-feeding arthropods (principally mosquitoes and ticks but also sandflies and midges) are called arthropod-borne viruses or, for short, arboviruses. The transmission of arboviruses to humans poses a significant and increasing global public health risk. The International Catalogue of Arboviruses currently lists 537 registered viruses, approximately 135 of which have been shown to cause disease in humans. Notable examples are dengue, chikungunya, yellow fever, Japanese encephalitis, West Nile and Zika viruses. In recent decades the emergence and re-emergence of the causative agents of these and other arboviral diseases has been greatly exacerbated by a combination of global demographic and societal changes, principally increasing rates and levels of urbanization, globalization and international mobility. These human factors have provided the mechanisms for such viruses to break out of their natural ecological zones to become established in novel geographical sites where susceptible arthropod vectors and human hosts provide conditions supportive to their causing epidemics. 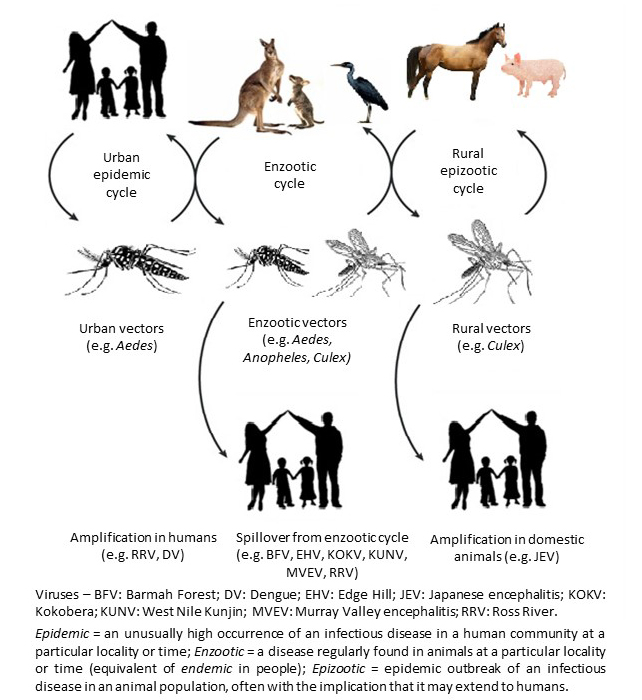 In this context should be placed the little known fact that more than 75 arboviruses which are unique to Australia have been identified. While a few of these indigenous antipodean viruses are recognized to cause disease in humans, there are limited or, in most cases, no information on the potential human pathogenicity of the vast majority. Ross River (RRV) and Barmah Forest (BFV) viruses trigger an often debilitating and sometimes chronic type of arthritis that affects several joints at once. Murray Valley encephalitis and West Nile Kunjin strain viruses cause inflammation of the brain, also called encephalitis. Sporadic outbreaks of dengue in northern Queensland are typically associated with influenza-like symptoms or, less commonly, life-threatening manifestations of haemorrhagic fever (with internal bleeding) or shock syndrome (with circulatory collapse). Other Australian arboviruses, such as Alfuy, Edge Hill, GanGan, Kokobera, Sindbis and Stratford, are also associated with human disease. However, they appear to cause predominantly mild symptoms and no major outbreak of any has yet been described.

For a long time it was speculated that infection with arboviruses may be a cause of feverish illness in Australia, as elsewhere in the world. This was confirmed with the discovery of the now frequently diagnosed RRV in 1959 and BFV in 1974. However, even after identification of these viruses it took almost 15 years for routine laboratory tests to diagnose infection to become available. Today, well over half of so-called undifferentiated fevers (those with non-specific symptoms) in Australia still go undiagnosed, in many instances because the treating clinician may feel the cost of testing is not justified or the causative agent is novel, not known to cause human disease or no routine diagnostic test is available. In such cases, an association could be assumed but not proved between arboviruses and feverish illness. Establishment of a thorough surveillance and diagnostic protocol would assist in the early diagnosis and correct treatment of affected patients.

For most of these ‘neglected’ Australian arboviruses viruses even the annual incidence of infection is unknown, let alone if there is any associated pathology such as that recently demonstrated so alarmingly for Zika in Latin America. Further investigation should also include a detailed determination of the transmission cycles of each zoonosis (a disease that can be transmitted from animals to people) that alternates between arthropod vectors and susceptible vertebrate hosts, some of which – thought to include marsupials and water birds – act as reservoirs of infection in the environment (Fig. 1). In order to evaluate the potential for the emergence of indigenous Australian arboviruses, to ascertain their possible public health impact, the likelihood of disease epidemics and to prepare with confidence to stem the spread of any such outbreak, these knowledge gaps must be closed. So doing will help to safeguard against Australia being underprepared to respond to a sudden epidemic of one or more of its native arboviruses.

This warning is particularly relevant to Northern Australia, a historically underinvested region the industrial, business and agricultural development of which the federal government has started to strongly promote as the population of the country continues to rise. This economic and social initiative is inadvertently leading to the accelerated mobilisation and settlement of an infection-naïve human population into hitherto un-encountered ecosystems inhabited by reservoir animals and vectors for neglected arboviruses. Together with an escalating number and increased impact of dramatic climate events, such as tropical cyclones and floods caused by torrential monsoonal rainfall that promote mosquitoes, this heightens the potential for viral transmission to humans. This multifactorial scenario creates a perform storm for indigenous arboviruses to emerge as significant agents of human disease in the coming decades in the tropical north of Australia.