The management of elderly patients with severe traumatic brain injury

The elderly population is defined by the World Health Organization as those aged over 65 years. Life expectancy has gradually increased but as the population of the elderly has progressively increased so has the incidence of traumatic brain injury (TBI). TBI in the elderly is caused predominantly by motor vehicle accidents (including pedestrians) and falls.   In 2013, trauma was the eighth leading cause of mortality in the elderly. 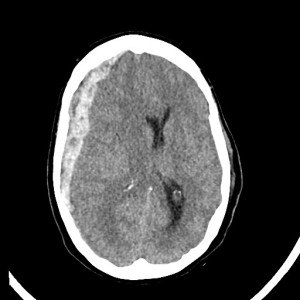 A patient with a severe traumatic brain injury and an acute subdural haematoma which is the white crescent shaped area on the scan. This is causing severe pressure on the brain.

Although clinical outcomes from severe traumatic brain injury (TBI) have improved since the 1980s, the risk of death and disability is significantly greater in the elderly population compared with younger patients.   A poor outcome includes cognitive and/or physical disability and a dependent life in a nursing home. If the elderly patient already has evidence of cognitive decline or dementia prior to the injury, this may be significantly worse following the injury.

Elderly patients often have chronic medical illnesses, and are on many medications some of which such as anti-blood clotting agents would increase the risk of bleeding in the brain following trauma. Their organ systems also have a lower tolerance to injury than younger patients but there is great individual variation. Any decision on the management of elderly patients with TBI must therefore consider ‘biological age’ as well as ‘chronological age’.

The dilemma for the treating neurosurgeon and intensive care physicians treating the elderly patient with a severe TBI is whether to perform life-saving surgery and provide ongoing maximal intensive care support, or alternatively to decide that further treatment is futile and allow the patient to receive palliative care and die. There may only be a small probability that maximal therapy would result in a good recovery with the patient becoming independent again and enjoying life. But can the experienced clinician predict the outcome with any confidence?

The presence of systemic injuries in addition to the brain injury significantly worsens the prognosis. Computer programs such as CRASH and IMPACT can be used to predict outcome in severe TBI. These programs are based on large data sets derived from patients with severe TBI and include clinical parameters such as age, pupillary size and reactivity and the Glasgow Coma Score (GCS). The GCS is a score of bedside assessment of the of the consciousness. The motor (i.e. movement) component of the score is the most relevant component of the GCS for prediction of outcome. However, the probability of a poor outcome or death may not apply to the patient currently under consideration.

Patients who are fully independent before the injury with good mental and physical status would usually be given active treatment including acute surgery. However, the presence of an acute subdural haematoma (which is a blood clot beneath the skull compressing the brain), is indicative of a severe structural brain injury and portends a high mortality in the elderly.

The patient may have signed an Advanced Legal Directive (ALD) which sets out their wishes for the circumstance where they can no longer make decisions for themselves. Religious considerations may also be important in many settings.

The physician must consider all of this information including the patient’s and their family’s wishes. The decision making is complex and challenging and requires the considerable judgement and experience. When it is explained to families that their elderly relative or parent is likely to die or end up dependent on careers in a nursing home if they survive, the family is often dissuaded from wishing to pursue surgery and ICU management.

After weighing up all these factors, the physician must do what is in the best interest of the patient.