The Oriental Region: the last frontier paradise for black flies

The Oriental Region is perhaps the last frontier paradise explored by black flies. It is shown by the comparison of the fauna of black flies in the Oriental Region, which is relatively young and rich, with those of the five other zoogeographical regions.

Black flies are tiny, two-winged, biting insects of medical and veterinary importance. They are distributed in many areas throughout the world, where there are clean, running waters suitable for breeding sites of their pupae and larvae. 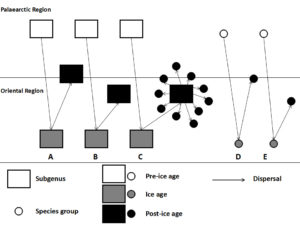 The number of extant species around the world is 2,204, of which 707 are from the Palaearctic, 524 from the Oriental, 326 from the Neotropical, 265 from the Nearctic, 204 from the Australasian and 216 from the Ethiopian Regions. All 524 Oriental species are classified in the genus Simulium, the largest among the 26 genera of the family Simuliidae. All the 25 other genera, which are regarded as more primitive than the genus Simulium, are absent in the Oriental Region. Under the genus Simulium, Oriental black fly species are further classified in 10 subgenera, of which four are cosmopolitan, two are of Palaearctic elements, one is semi-endemic and three are endemic. The subgenus Simulium is dominant, having 232 species (44.3%), followed by Gomphostilbia with 193 species (36.8%) and Nevermannia with 55 species (10.5%), while seven other subgenera consist of 1–16 species. The three dominant subgenera (Gomphostilbia, Nevermannia and Simulium) are composed of 11, 3 and 13 species-groups, respectively.

The numbers of species in each zoogeographical region might have been determined by the number of phylogenetic segregates and their capabilities to undergo speciation. The number of segregates in the Oriental Region is moderate, 34, whereas it is 57 in the Palaearctic, 46 in the Neotropical, 37 in the Nearctic, 30 in the Australasian and 22 in the Ethiopian Regions. On the other hand, the speciation index is the highest, 15.4, in the Oriental Region, followed by 12.4 in the Palaearctic, 9.8 in the Ethiopian, 8.8 in the Neotropical, 6.8 in the Australasian, and 5.8 in the Nearctic Regions. The result shows the high rate of speciation is a main driving force for the rich fauna of the Oriental Region. In fact, it is associated with high speciation rates of the two dominant subgenera, Simulium and Gomphostilbia. The Oriental Region might have been remarkably suitable in its climatic and environmental conditions for both subgenera to undergo speciation. Perhaps, it was advantageous to be in no competition with other genera. The existence of these two large subgenera might have played a significant role in forming the current simuliid fauna in the Oriental Region.