The origin and evolution of fertility-linked signals in bees

Bees, ants and wasps comprise a biological group named Hymenoptera. In the species of this group, various levels of social organization can be found – from solitary individuals to highly complex social societies. An important characteristic of these complex insect societies is that they present different morphological castes such as males, queens and workers. Usually workers refrain from reproducing and perform tasks such as foraging and defending the colony while the queen will take care of producing the next generations of work force as well as the new reproductive individuals. This apparent paradox of the existence of a sterile caste intrigued Charles Darwin who considered specially challenging to explain why individuals would not reproduce themselves. It turns out the answer lies on the genetic relatedness among the individuals in a colony. 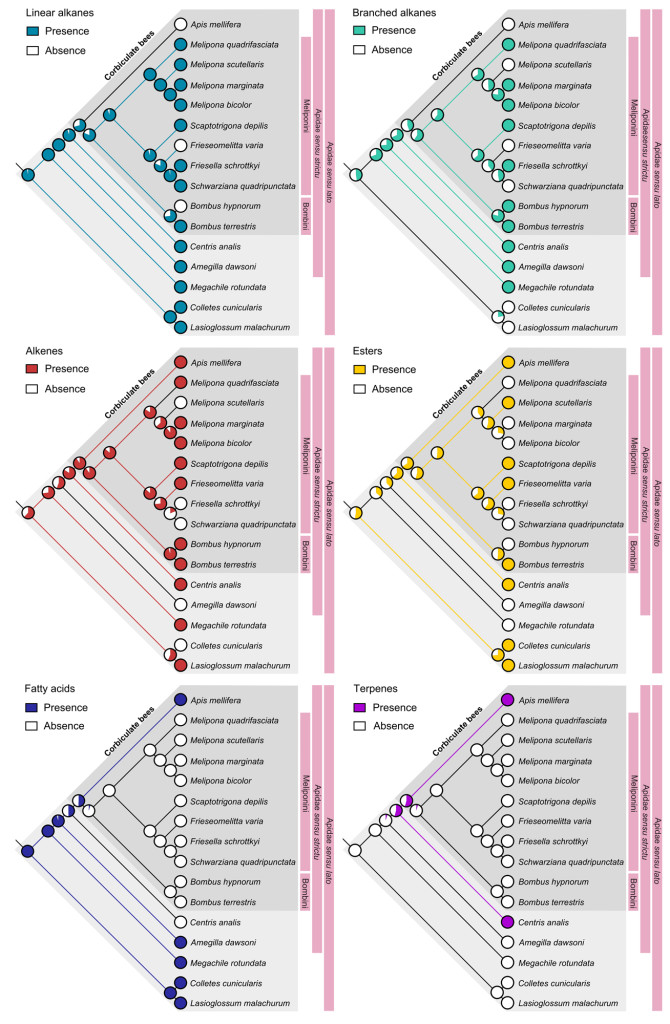 Fig. 1. Ancestral state reconstruction of six major classes of fertility-linked signals in bees. Pies show the likelihood in percentage of a given character being present in the node and coloured branches represent branches for which the likelihood was greater than 50 %.

Of course, in nature not everything is so black and white. Reproductive conflicts between the female castes can sometimes arise in these seemingly pacific societies. One of the mechanism keeping the social harmony in the colony are the so called “queen pheromones” which are chemical substances characteristic of queens that signal both her presence and her fertility status to the workers.  In most hymenopteran species, it has been found that these compounds are simple long chain saturated hydrocarbons present on their cuticle, which have a primary function of preventing dehydration, but are also used as fertility signals. This class of compounds could be traced back ca. 150 Mya in an ancestral state reconstruction before the origin of sociality in the entire group.

In bees, however, the chemical nature of these fertility-linked compounds appears to be more diverse than in ants and wasps. While in ants and wasps only three different chemical classes of compounds are consistently found to be fertility-linked, in bees alone, 12 different chemical classes could be observed. Moreover, it was unknown how queen signals evolved across this group and how they might have been co-opted from fertility signals in solitary ancestors.

In order to solve this puzzle we collected and analyzed fertility-linked chemical data across 16 different bee species including for the first time solitary species as well as social ones and were able to trace the evolution of these characters from solitary linages to the highly social species.

Our results demonstrate that some classes of compounds (linear and branched alkanes, alkenes, esters and fatty acids) were already present as fertility-linked signals in the solitary ancestors of Corbiculate social bees, while others appear to be specific to certain species. Overall, our results suggest that queen signals in Corbiculate bees are likely derived from ancestral fertility-linked compounds present in solitary bees that lacked reproductive castes. We show that some classes of compounds were already signaling fertility before the appearance of all extant bee species, whereas others first appear before the origin of the truly social species. We hypothesized that these fertility-linked signals must have had a different function in these solitary linages, for example, they could merely be a by-product of ovarian activation or perhaps could have served other communicative purposes, such as in mate recognition or the regulation of egg-laying. We suggest that in bees it seems that such fertility-linked signals are derived from mate recognition signals given that in several species these compounds are also shown to correlate with fertility. In summary, our study support the hypothesis that fertility signals and queen pheromones are likely derived from preexistent communication systems that were co-opted to a different function in bees, ants and wasps, and adds new insights on how sociality evolved and is maintained in this group.