The psychopath’s unusual focus on reward

The word “psychopath” conjures up the image of the deranged serial killer. The reality is very different. Psychopathy, especially the primary variant, is a genetically determined disorder that leads to a serious lack of emotional experience, which, in turn, precludes the development of social emotions such as shame and guilt during childhood, and thus hinders the integration of those affects into a developing model of morality. However, apart from their emotional handicap, psychopaths can be high functioning members of society. Some studies have even found psychopathic traits in the highest of ranks, such as the presidents of the United States. Nonetheless, there is a great deal of variety in the psychopathic population and while some are able to control themselves when it matters, others are impulsive and prone to take flagrant risks without considering consequences. 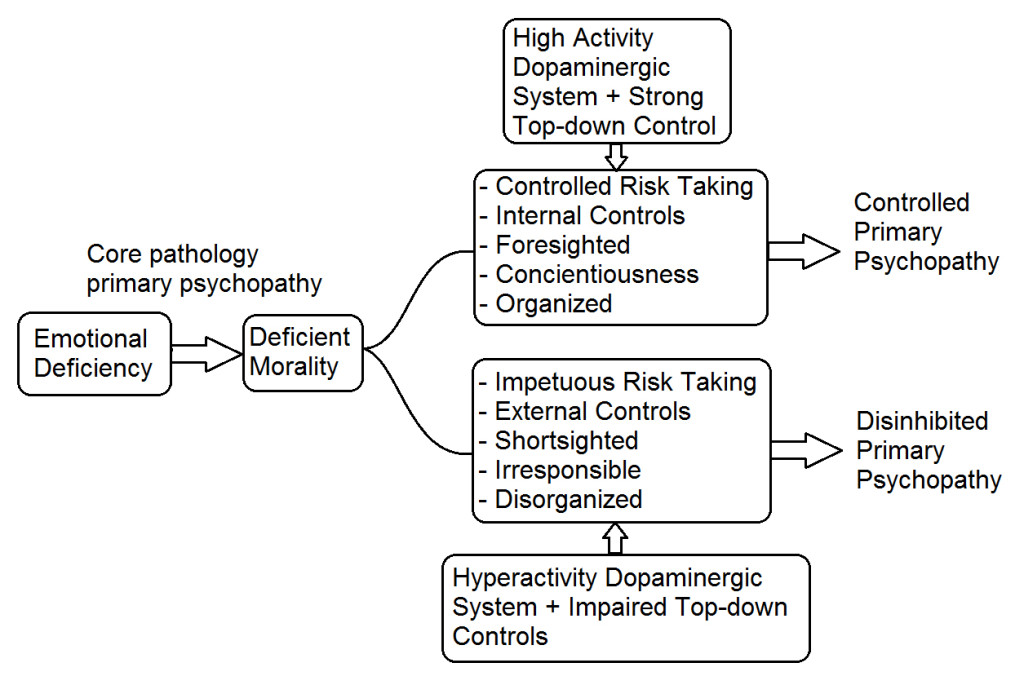 The recently proposed primary psychopathic continuum by Yildirim and Derksen argues that primary psychopathic people can be situated on a scale that spans from very well controlled, deliberate, and foresighted to highly impulsive and short-sighted. Some contemporary media examples of the controlled subtypes are Frank Underwood from the TV series House of Cards or Louis Bloom in the movie Nightcrawler, while examples of the more impetuous types are Alex DeLarge from the movie A Clockwork Orange or Lisa Rowe in A Girl Interrupted. Since all psychopaths share the same emotional superficiality, it is paramount to ask what causes these differences. Why are some psychopaths controlled and foresighted, able to plan and execute long term plans with the utmost care and deliberation, while others just act on their whims and are unable to forestall even the smallest of rewards in favor of much more desirable goals, such as staying out of prison for example? The answer may lie in their brains, especially with regard to the way their dopamine system functions. The dopamine system at its core is a regulator of our energy balance. Simply put, it computes the potential availability of environmental sources of reward and translates this data into actual motoric drive towards those potentialities. In other words, it regulates our motivational drive towards palatable and much needed rewards. The human race is a highly varied species and this also applies to our dopaminergic systems. In effect, when the dopaminergic system is unable to find external sources of potential reward, it shuts itself down in order to conserve energy lest more desirable circumstances arise. This state is called depression. On the other extreme, the dopaminergic system latches onto a multitude of potential rewards and suddenly the individual feels as if the world is full of opportunities and as if all those opportunities are actually feasible and within grasp. This state is called mania. Similarly the difference between the controlled and disinhibited psychopaths is that the impulsive ones have by default, because of genetics or other influences such as chronic substance abuse, a much higher baseline level of dopamine activity. These individuals are continuously driven by rewards and unable to forestall any possibility to potential rewards. Whenever a reward enters their sights, they lose touch with longer term aspirations and like a dog seeing a cat, lock their focus and do not let go until said reward has been attained. This hyperfocus on rewards, as we like to call it in scientific literature, causes the psychopath to ignore all warning signs and keep his eyes on the prize, no matter what. In the end, such psychopaths will often go to jail for offenses that are just not worth to sacrifice their freedom for. In sharp contrast, the controlled psychopaths have a more optimal functioning dopamine system and are thus able to think things through before making decisions. Their dopamine system is able to control itself in favor of longer term ambitions.

The argument made by Yildirim and Derksen is that the emotional deficiency may not be amenable to psychological nor pharmacological therapy, but that there is a possibility of stabilizing the dopaminergic system of those impulsive psychopaths so that they become a little more like their controlled counterparts. If we wish to treat psychopaths successfully this an important but currently understudied area of potentially fruitful research.