The role of the Amazonian forest in removing atmospheric mercury

Mercury (Hg) is a naturally-occurring chemical element found in rock in the earth’s crust, including in deposits of coal and oil. Nevertheless, it is considered by the Word Health Organization as one of the top ten chemicals of major public health concern. Mercury becomes a problem for the environment when it is released from rock and ends up in the atmosphere and in water. These releases can happen naturally (e.g. by volcanoes irruptions) or due to anthropogenic activities (e.g. when burning coal and oil or mercury-containing wastes like electronic devices, batteries, light bulbs and thermometer that are thrown into garbage; it is also largely used in the artisanal and small-scale gold mining sector). Once in the atmosphere, mercury (mainly present as inorganic mercury) can be transported over a range of distances — anywhere from a few feet from its source, to halfway around the globe — before it is deposited in soil or water. In aquatic environment, inorganic mercury can be converted to methylmercury (one of the mercury compounds formed when mercury combines with carbon), which is one of the most toxic Hg compounds. Furthermore methylmercury bioaccumulates in aquatic food chain and adversely affects human health on a global scale through fish consumption. 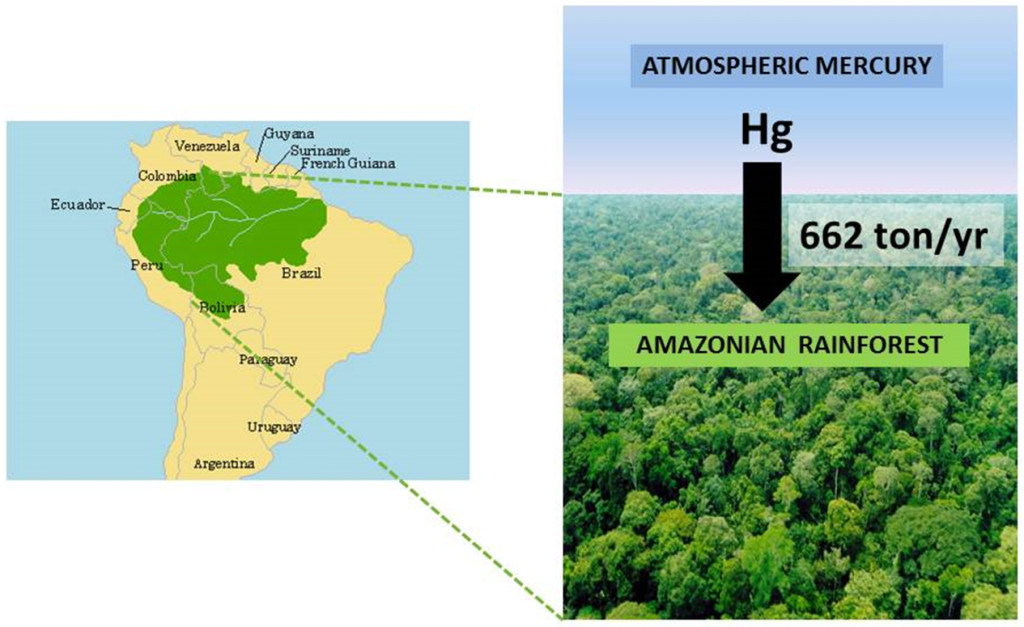 Atmospheric mercury is effectively trapped in forest canopies by deposition on leaves surface. Mercury compounds that accumulate on foliage are then transferred to the soil through litterfall and its decomposition, and via throughfall (rainfall that passes through the canopy and becomes enriched in Hg because of the wash-off of dry deposited Hg compounds from the leaf surfaces). Forest ecosystems act therefore as Hg sinks by limiting the mobility of this element in the environment.

The Amazon rainforest covers approximately 5.5 million km2 distributed over nine countries in the South America, and represents over half of the planet’s remaining rainforests. So in a recent work we calculated the quantity of Hg that can be removed from the atmosphere and stocked in this forest every year.

The results showed that total Hg deposition, which is defined as the sum of Hg deposition via litter and via throughfall, would be of 121 g km-2 y-1. Combining this data with the forest area (5,475,737 km2) resulted in a total amount of mercury immobilized in this forest of approximately 662 ton per year.

On the other hand, the Amazonian forest suffers deforestation that is primarily due to the land conversion process that follows colonization and is generally performed by clearing and forest burning. During fires, part of the Hg stocked in soil and vegetation is volatilized and therefore reemitted to the atmosphere. Considering the annual rate of deforestation of the Brazilian Amazonian forest (11,075 ± 7177 km2 yr-1 for the 2004-2014 period) we estimated that ~7 ton Hg can be reemitted to the atmosphere each year due to forest burning. It has also been shown that after deforestation Hg leached from soils is partially transferred toward water courses.

Up to now very few studies have been carried out on atmospheric Hg deposition/emission in the Amazonian forest. Nevertheless, the present data clearly show the importance this region should have in the global Hg cycle.