The worldwide prevalence and phenotypic features of polycystic ovary syndrome

PCOS is the most common endocrine disorder among women of reproductive age. Although many studies have investigated the prevalence of PCOS, there are discrepancies in their results. Even using the same subset of diagnostic criteria, the reasons for the variation of reported prevalence in the epidemiological studies presents are differences in study populations, limitations within the sampling and protocols applied and a lack of standardized definitions for the phenotypes. The effects of race and ethnicity, particularly, on the clinical presentation of androgen excess and enhancement in the visibility of antral follicles over time with ultrasonography might also contribute to the inconsistencies between prevalence studies. 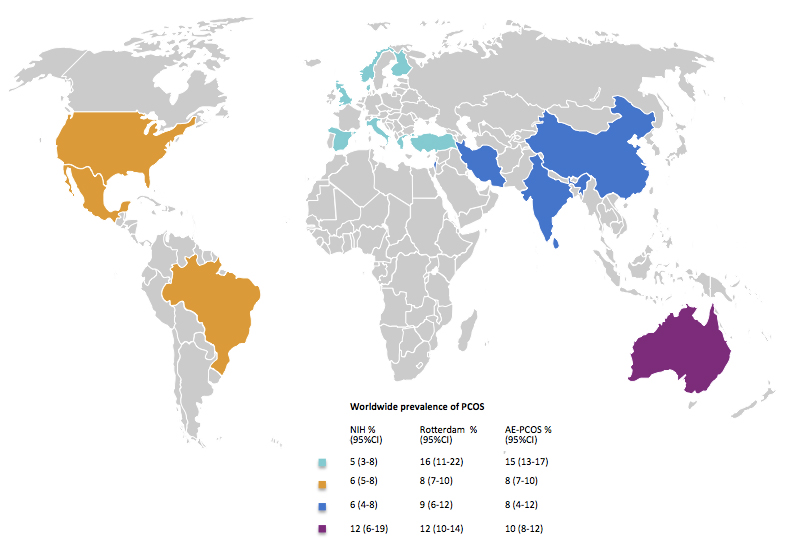 A total of 55 reports remained following screening of the abstracts and text for the subject of the study. Of these, 24 articles were eligible and evaluated for qualitative and quantitative synthesis. Since heterogeneity was observed among studies, a random-effects model was used to estimate the prevalence and its 95% CI. The proportions of PCOS prevalence (95% CI) according to the diagnostic criteria of NIH, Rotterdam and AE-PCOS Society were 6% (5–8%, n = 18 trials), 10% (8–13%, n = 15 trials) and 10% (7–13%, n = 10 trials), respectively. When only unselected population studies were included, the given rates were 6% (5–8%, n = 3 trials), 9% (7–12%, n = 6 trials) and 10% (7–14%, n = 3 trials). The available prevalence of PCOS data according to originating country across the continents is depicted in Figure 1. The respective proportions for hirsutism, hyperandrogenaemia, polycystic ovaries (PCO) and oligo-anovulation were 13% (8–20%, n = 14 trials), 11% (8–15%, n = 9 trials), 28% (22–35%, n = 12 trials) and 15% (12–18%, n = 19 trials), respectively. The effects of ethnic differences, particularly, on the presence or severity of hirsutism cannot be ruled out in any way. In addition, there was a lack of standardization in defining phenotypes of the syndrome and selection bias was evident in most of the studies regarding recruitment of the cohorts.

Geographical differences in frequencies of the components of the syndrome, such as oligo-anovulation and clinical/biochemical androgen excess, must be taken into account in the development and implementation of regional diagnostic and precision treatment strategies. Further efforts and resources are required to increase standardization of the methods and comparability of the study results on prevalence and phenotypic characterization of PCOS around the globe.