Extracellular vesicles (EVs) are membrane-enclosed entities actively released from cells into almost all types of bodily fluids such as blood and urine. Exosomes, i.e. small EVs with 40-100 nm in diameter, are particularly important since they serve as cell-to-cell messengers delivering biomolecules such as DNA, RNA, and proteins. The isolation of these vesicles and the subsequent characterization of their cargo could provide pathological clues. This has however proved to be challenging, because despite the abundance of EVs, current methods such as ultracentrifugation and filtration are time-consuming, labor-intensive, and require large sample volumes while they mostly can separate based on vesicle size. 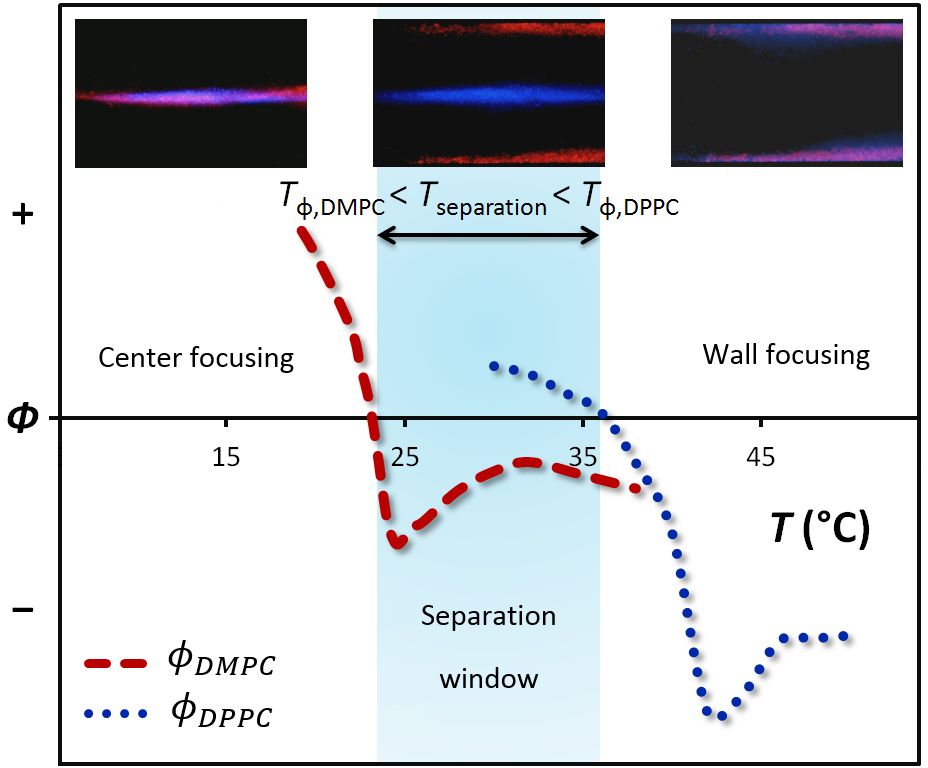 Acoustophoresis or separation using acoustic waves is a simple, label-free method capable of differentiating vesicles and cells only based on their physical properties. In acoustophoresis, a standing-wave exerts a pressure field allowing vesicles to position at either the low or high pressure regions of the channel depending on the sign of a term known as the acoustic contrast factor, Φ. Properties influencing this response include size of the vesicles in addition to the density and compressibility of the vesicles and their medium. This distinction of acoustophoresis is of importance since composition-dependent changes in vesicles could bring about sensible changes in their physical properties.

In this study, in order to differentiate between vesicles of different sources and compositions, the investigators relied on the sensitive response of vesicles’ compressibility due to temperature changes. Due to their phase change behaviors, vesicles undergo transitions from positive to negative Φ at a unique temperature based on their composition, referred to as the acoustic contrast temperature, TΦ. This transition is caused by ordered to disordered phase transition in response to heating, causing the membrane of the vesicles to become more compressible or less stiff. Therefore, when a mixture of two distinct vesicle compositions with distinct TΦ properties are injected into the microfluidic device, if the device is operated at a separation temperature where TΦ,ves1<Tseparation<TΦ,ves2, then vesicles separation can be achieved. This approach was dubbed as thermally-assisted acoustophoresis by the investigators, and for brevity was referred to as thermo-acoustophoresis. Figure 1 depicts the separation window and shows fluorescent micrographs of the channel with DMPC (ves1) and DPPC (ves2) vesicles both experiencing Φ>0 at Tseparation<TΦ,ves1<TΦ,ves2, each experiencing a different Φ sign at TΦ,ves1<Tseparation<TΦ,ves2, and both experiencing Φ<0 at TΦ,ves1<TΦ,ves2<Tseparation. The separation shown in the figure achieved separation efficiencies exceeded 95%. The recovered vesicles in their corresponding outlets were unchanged and still in their native state. It is anticipated that as long as a safe temperature range was employed (1-43oC), no permanent change to the genetic or proteomic properties of the biological vesicles will occur.

This study demonstrated that vesicles (average diameter of 10 μm) can be differentiated and separated based on their compositions using thermo-acoustophoresis. By setting up temperature conditions that allow opposite Φ signs for each vesicle system, separation was achieved. This tool is expected to be of importance in the future for the sorting of extracellular vesicles based on their compositions.