Thermo- and soluto-capillarity: Passive and active drops as micro-fluidic carriers or reactors

Why study drop (or bubble) motions? Drops can be seen free, hanging, suspended in air, sessile, aggregating, coalescing, disintegrating/splitting or spreading in nature, in engineering processing or at home. Think about dew, fogs with drops of diameters in the range about 20 micrometers, rain with drops that may attain one or more mm in diameter, aerosols, emulsions, colloids, etc. Their motions offer beauty and challenges from the scientific, engineering and artistic perspectives. Driven or self-propelled drops can be useful models for natural or artificial bio-swimmers. They can also be used as neutral micro-fluidic carriers or endowed with chemical machinery (micro-fluidic reactors) acting e.g. as energy transducers from chemical to mechanical energy. Drop’s activity can be the result of either emission or adsorption of a solute/surfactant (surface active) molecules leading to or consequence of an internal, external or interfacial chemical reaction, endo- or exo-thermic. 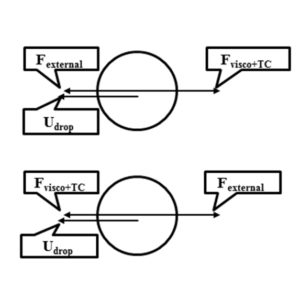 Fig. 1. Cooperation or competition between forces (external, thermo-capillary/FTC, drag/Fvisco) acting on a drop or a bubble. Noteworthy is that thermo-capillary forces may be several orders of magnitude larger than those generated from electric fields or optical tweezers. When the resultant force is in the direction of the drop’s motion (drop velocity and force vectors are parallel) we have a resistance force. In the opposite case (antiparallel vectors) the force gives thrust hence self-propulsion.

It is possible for a drop, initially stationary in an isothermal surrounding, to move due to the action of a uniform source of heat or mass within the drop, or uniform generation of heat at the surface of the drop due to a chemical reaction. A disturbance that causes a slight movement of the drop will lead to a temperature variation on the surface of the drop, because of the non-uniform heat transport between the drop and the surrounding fluid arising from the action of the convective transport outside along its surface. Under the right conditions, the drop will continue to move in the same direction due to the action of the thermo-capillary stress, sustaining the motion indefinitely. Indeed, for most liquids, the interfacial tension decreases with the increase of temperature. In the proximity of a drop’s surface, an interfacial tension no uniformity drives flow (denoted Marangoni effect) directed toward increasing surface tension with motions, inside and outside the drop.

At the level of lowest order approximation, the significant result is that the force acting on a drop or on a bubble can be expressed in a “universal” formula. This easily permits to ascertain if the net resultant force on a passive or an active drop or bubble leads to resistance or thrust and from that the terminal, settling velocity of the drop or the bubble can be determined when all forces involved are made explicit (Fig. 1). Due to the drop’s activity, thrust in the form of self-propulsion is possible as well as a normal or super-resistance/drag force. At such approximation level, flow is controlled by viscous rather than inertial forces and then there is either creeping flow and/or flow of tiny objects. Yet though viscous drag is paramount this is compatible with the carrier fluid itself being only of small viscosity. This is the realm of micro-fluidics.

Research on capillary phenomena and, in particular, the study and applications of statics and dynamics of drops, bubbles and other systems like liquid bridges, had a high momentum in the second half of the XXth century due to the availability of space exploration related facilities. It was the time of so-called microgravity research, or better said research motivated by the availability of low effective gravity facilities (in principle down to 10-6gEarth: drop tubes and towers, sounding rockets, aircraft for parabolic flights, and the various space labs including the one in the Space station). Then at the end of the century, a golden period came for the same fluid physics subfield with the availability of micro-electronics and micro-electro-mechanical (MEMS) devices, surely also fostered by the needs of space exploration. These technologies have been indispensable for the extraordinary development of micro-fluidics.