Tobacco use in women of reproductive age

Despite reductions in rates of cigarette smoking among U.S. adults over the last 50 years, rates of smoking among women have decreased at a lesser rate compared to men. In fact, among socioeconomically disadvantaged women, rates of smoking have even increased (Chilcoat, 2009). Use of alternative tobacco and nicotine products such as electronic cigarettes (e-cigarettes), cigars, and hookah has increased over the last several years (Breland et al., 2016; SAMHSA, 2015; Lopez et al., 2017). Little is known about the use of these products in vulnerable populations, such as women of reproductive age (Chivers et al., 2016; Lopez & Eissenberg, 2015). Women of reproductive age (15-44) represent an important sub-population since their personal health decisions have the potential to impact future generations. For example, perinatal cigarette use can lead to catastrophic complications during pregnancy and the risk of preterm delivery amongst other important adverse outcomes (Cnattingius, 2004; Dietz et al., 2010). The extent to which alternative tobacco and nicotine products mirror the effects of cigarette smoking on reproduction is not well known. For these reasons it is imperative to monitor rates of product use in this important population. 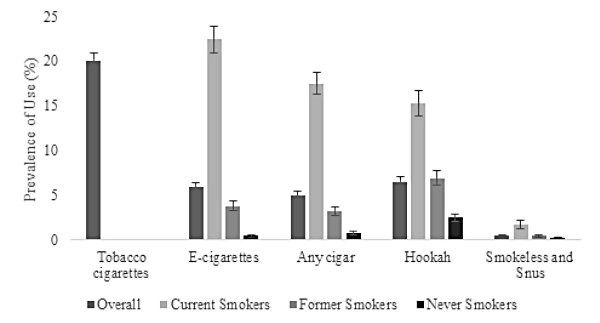 The primary purpose of this study was to examine prevalence rates and correlated of tobacco and nicotine use in a nationally-representative sample of women of reproductive age. Women included in this study were not currently pregnant at the time of completing the survey. However, parallel studies using the same methodologies were also completed in women who reported being currently pregnant (Kurti et al., 2017; Kurti et al., 2018). Prevalence rates and correlates of using cigarettes, e-cigarettes, and other tobacco/nicotine delivery products were obtained from a U.S. national sample of women of reproductive age. Weighted data were obtained from women aged 15–44 years who were not currently pregnant in the first wave of the nationally-representative Population Assessment of Health and Tobacco (PATH, 2013–2014) study (N = 12,848).

Current rates of cigarette smoking remain relatively high among women of reproductive age and is strongly correlated with use of other tobacco products such as e-cigarettes, cigars, and hookah. Continued monitoring of tobacco and nicotine use in this population is important due to the additional risk of adverse health impacts if these women were to become pregnant. Healthcare providers should ask their cigarette smoking patients if they are using other tobacco products. Among women of reproductive age, use of emerging tobacco and nicotine products appears to be largely, although not exclusively, restricted to current cigarette smokers. However, use of emerging tobacco and nicotine products should also be asked of former cigarette smokers. There is great interest in monitoring the extent to which the rapidly changing tobacco/nicotine marketplace may be reaching and impacting those who have never smoked cigarettes. The current results raise no alarms in that regard although the 2.7% prevalence of hookah use among never smokers should not go unnoticed.