Towards wearable electronic devices that are powered by sweat

How would it be to charge your smartphone or iPod with your sweat while training? This would definitely be a green way to power portable electronics that you use everyday!

The benefits of such attractive energy convertors, however, would go above and beyond this simple example of an application! They could in fact be used for self-powered wearable healthcare devices for important applications, such as the painless detection of target biomarkers (i.e. organic molecules that indicate the health status of a patient, such as glucose for diabetic patients), transdermal drug delivery systems and monitoring of athletes fitness during exercise.

Fig. 1. Scheme of the Enzymatic Fuel Cell (EFC) developed in this work. The device consists of a cascade of three EFCs, characterised by three couples of anode and cathode, connected to an external wire each. At the anode (negative electrode) the enzyme glucose oxidase (GOx) breaks down glucose (C6H12O6) into gluconolactone (C6H10O6), protons (H+) and electrons (e-). The latter flow through the external circuit thus producing electricity and combine at the cathode (positive electrode) with protons and oxygen (O2) to form water (H2O). This happens thanks to the action of another enzyme: laccase (LAC). Both the anode and the cathode are made of highly porous gold (hPG).

Wearable healthcare devices are attracting increasing attention, considering the massive advantages that they bring over traditional diagnostic methods. This is because such devices would minimise the need for hospitals and clinics, whilst allowing a continuous and more efficient monitoring of people’s health. The result would be a drastic reduction in healthcare costs, as well as enabling a broader range of users access to clinical diagnostics to a broader range of users, including those from the poorest countries, with immediate benefits on the quality of life of the billion people worldwide affected by long-term health conditions.

Usually electronic devices are powered by lithium batteries, which are difficult to miniaturise, thus making them unsuitable for the minimally invasive requirement that should be met by wearable devices. Lithium batteries also require frequent recharging or replacement. Finally, lithium batteries are not sustainable: the world’s commercially extractable lithium resources are very limited and whether they can meet future needs is unclear.

Enzymatic fuel cells (EFCs) can offer an important alternative. These revolutionising devices are able to generate power from the sugars naturally present in physiological fluids, such as sweat, by using enzymes entrapped (immobilised) onto conductive materials (electrodes) that break down the sugars into electrons that can be gathered to generate electricity. This is possible by separating the overall reaction into two half reactions (oxidation and reduction) occurring at an anode and a cathode electrode respectively, and by connecting the two electrodes through a conductive wire, as shown in Fig. 1. Contrary to lithium batteries, EFCs are easy to miniaturise, and, in principle, they generate constant electricity, providing that they are constantly fuelled, with no need for replacing and recharging. The key challenges that researchers are facing that seriously prevent practical implementations of EFCs are represented by:

1) The effective electrical communication between the enzyme and the electrode. Several research groups have addressed the issue of poor electrical contacts by introducing in the system specific molecules that shuttle the electrons from the enzyme to the electrode. Although this solves the problem, the use of these shuttles is incompatible with practical implementations as they are not naturally present in physiological fluids and in some cases are toxic.

2) The enzyme immobilisation. The immobilisation protocols reported so far are usually very complicated and hard-to-be-reproduced by other researchers or at an industrial scale. 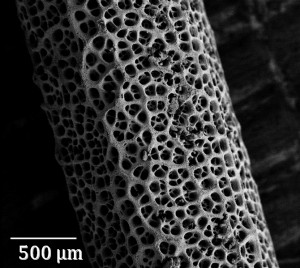 At the University of Bath we have developed innovative nanostructured electrodes, with a spongy shape (Fig. 2.), and we have efficiently entrapped enzymes onto its structure via an easy-to-reproduce procedure. The spongy structure of the electrodes allows an effective electrical connection of the enzyme with the electrode by shortening the distance that the electrons have to travel from the enzyme core centre to the electrode. To increase the power generated, we have designed a compact and handy device that embeds a cascade of three EFCs, obtaining an amount of electricity three times higher than a single EFC. Although the power density peak is low (approximately 2 μW cm-2), our study provides important guidelines on how to scale up the power generated by EFCs. Moreover, we have demonstrated for the first time stable power generation from transdermal extracts.

Our work, therefore, paves the way to self-powered wearable sensors that harvest the energy required for their functioning directly from the sugars in sweat. We also demonstrate the potential for producing a signal proportional to the glucose concentration, by using samples with very large differences in glucose concentrations (in the orders of uM and mM).