Sediments are the most important reservoir of trace metals, thus, serve as vital indicator to intercept the mechanism of transportation and accumulation of trace metals in the coastal environment. Sediment texture, mineralogical composition and physical transformation influence the distribution and accumulation of trace metals. Twelve trace metals viz. Sb, As, Be, Cd, Cr, Cu, Pb, Hg, Ni, Se, Ag, Ti and Zn have been classified as priority pollutant by the United States Environmental Protection Agency (USEPA). A comprehensive investigation was carried out to appraise the vulnerability of the ecosystem due to trace metals along south east coast of India (Fig. 1). 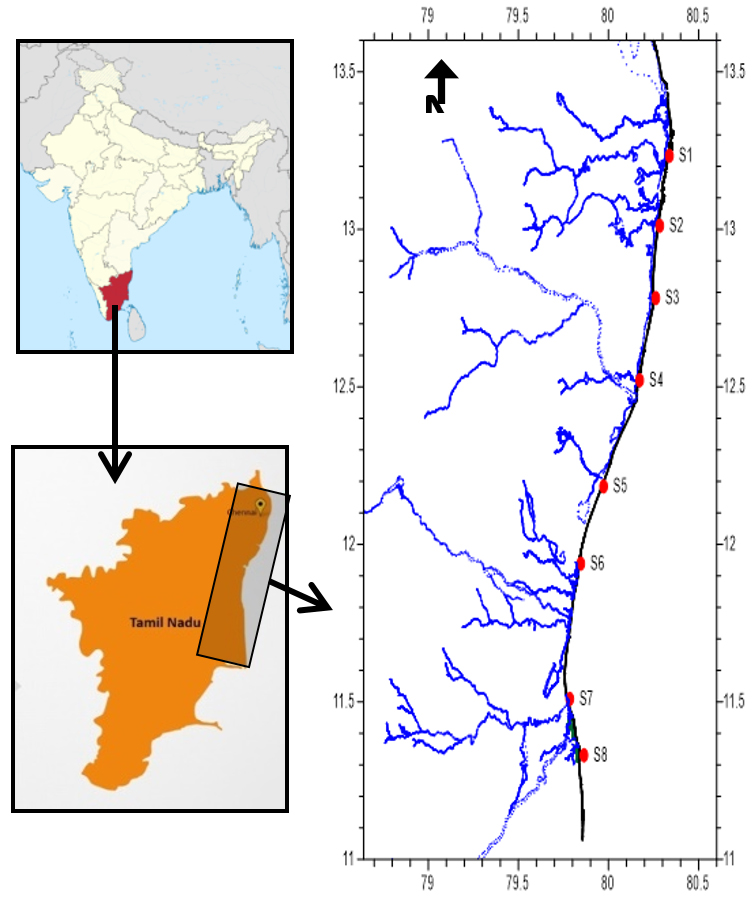 Risk associated with these trace metals level in the sediments of the study area was evaluated by various ecological risk descriptors such as Contamination Factor (CF), Enrichment Factor (EF), Pollution Load Index (PLI), Geo-accumulation Index (Igeo) and Probable Effect Level Quotient (Qm-PEL). These indices highlight the extent of sediment contamination with trace elements and their possible sources. Our study on the distribution pattern of ten trace metals viz. Cr, Mn, Co, Al, Fe, Ni, Cu, Zn, Cd and Pb in the marine surface sediment revealed that the coastal sediment along the south east coast is mostly benign in nature as indicated by the PLI values. Except cadmium, CF values for all the metals ranged between 1 ≤ CF ≤ 3 indicating moderate metal contaminations along the coast. Except Cr, all the metal concentrations were below Probable Effect Level (PEL: Cr: 160.0, Cu: 108.0, Pb: 112.0, Zn: 271.0, Cd: 4.2 mg-kg-1) which indicated no potential harm for aquatic organism. Because there is no interim marine sediment quality guidelines (ISQGs) specified for Ni, Mn, Co, the sediment quality with respect to these metals could not be evaluated. In general, the overall sediment quality of the studied area has not been adversely impacted by trace metal pollution. The possible biological effect of combined metals viz. Cr, Cu, Cd, Pd, Zn as evaluated by Mean Probable Effect Level quotient (Qm-PEL) indicated the toxicity probability below 21 %. However, EF, CF and Igeo indicated severe contamination of the sediment by Cd, which needs detailed investigation about its source. 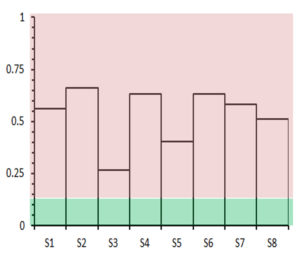 The high cadmium exposures in the study area are most likely related to human activities such as industrial discharges, urban waste disposals, agricultural and /or from natural origin from the erosion and abrasion of rocks and soils, and singular events such as forest fires and volcanic eruptions. Sediment texture and metal concentration have been frequently correlated to ascertain the potential controlling factor for metal mobility. Among all the metal studied, Fe (r=0.498, p<0.01), Cu (r=0.780, p<0.01), Zn (r=0.593, p<0.01), and Co (r=0.504, p<0.01) showed significant positive correlation with clay. The fine particles such as silt, clay, and colloidal materials are generally surface-active and contain organic matter and thus can contribute to the deposition of metals as also observed in our study. Chromium demonstrated strong negative correlation with clay (r= -0.648, p<0.01) and was the only metal which showed positive correlation (r=0.569, p<0.01) with sand content indicating dominant detrital binding where the Cr concentrations depended on the source rock fragments rather than fine fractions.