The formation of new small blood vessels is essential during development and as a repair mechanism in disease. In the lung, blood vessel formation is altered in diseases such as severe bacterial infection and tumour spread. The process of blood vessel formation requires an increase in cell number, cell movement, cell stickiness and transition into tubes, which mature into vessels capable of carrying blood. 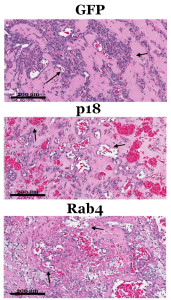 Endosomes are small packages of biological cargo which are found in the cell. These packages move around the cell in a highly regulated system, managed by many different proteins. For example, a small protein called Rab4 can attach to the endosome and push these packages to the cell surface, allowing the release of the biological cargo from the cell. A new protein called p18 is able to bind to the endosome and either signal to other proteins or release contents of packages from the cell. The biological cargo in these small packages is wide-ranging, however their effect on blood vessel formation is not known.

In small blood vessels from the lung, increased p18 or Rab4 levels result in increased cell movement, stickiness and tube formation. Both proteins are responsible for the formation of new vessels which have the capacity to carry blood. These effects are dependent on the ability of p18 and Rab4 to bind to the endosome. Rab4 effects blood vessel formation by controlling the movement of the package through the cell however p18 acts through signalling to other proteins which regulate cell movement, stickiness and tube formation. Furthermore, Rab4 exerts a positive effect on blood vessel formation through p18.

The role of Rab4 and p18 on small blood vessel formation in the lung offers a new insight into how these packages of biological cargo can be targeted to treat diseases of disease such as tumour spread and infections.