Our psychological ‘arrow of time’ is conditioned by the Second Law of Thermodynamics, i.e. by the law of increase in entropy. A drop of blue ink will spread in water, as would white milk in black coffee. These processes are irreversible. A box with many small macroscopic black and white balls can start in an ordered configuration ((a) or (c) in Fig. 1). However, if we shake the box (representing thermal shuffling of molecules), the ordered configuration evolves to a state of spatial uniformity, maximum randomness and entropy ((b) in Fig. 1).

Fig. 1. The thermodynamic evolution to uniform equilibrium, and its reverse by Turing instability. The evolution represented by the dashed arrows represents the spontaneous evolution of ordered configuration towards maximum randomness and uniformity. The evolution represented by continuous arrows is driven by the Turing instability. It starts from a state of maximum mixed-upness and randomness and evolves towards an ordered configuration.

Alan Turing’s “Turing Instability” is the idea that reaction and diffusion can result in the opposite evolution, whereby the uniform state ((b) in Fig. 1) become unstable and evolves to an ordered configuration ((a) or (c) in Fig. 1). The central problem has been to find out if and how his idea is realised in real biology. Since I have identified the Turing system in real biology, Alan Turing—who is widely recognized for his life-saving codebreaking contributions during WWII, as well as for being the father of modern computers and artificial intelligence—should also be celebrated for the “Turing Instability”.

Life’s apparent challenge to the Second Law has been recognised for many years, and was the main cause of theories of vitalism: instead of evolution to randomness, life involves transitions to functional coherence of molecules in space. This is seen, for example, in the operation of the mitotic spindle and the contractile ring, and in cell differentiation and morphogenesis. The problem raised by such processes is often referred to as the problem of “localisation” (see E.B. Wilson’s or H. Driesch’s works, which highlighted that, if one looks early enough, every egg is homogeneous). Thus, a central question in biology is how a uniform random system ‘by itself’—i.e., without any external localisation impinging on it—manifests localisation (epigenesis), and can we predict the shape of the emerging spatial localisation?

It makes sense to assume that if natural selection has ‘discovered’ the Turing instability, it has put it to a good use. Indeed, natural selection has used the Turing instability to spontaneously convert chemical energy to localised biological work. Since the thermodynamic driving force of ATP hydrolysis is stabilised far from thermodynamic equilibrium, and the metabolic rate is an increasing function of the concentration of the Turing morphogen cAMP, the spatial distribution (pattern) of the positive power (and positive entropy production, and energy release), and of the coupled negative power (and negative entropy production, and biological work), mirror the spatial pattern of the identified Turing morphogens; this is an eigenfunction, similar to those of the electron clouds in atoms and molecules, and to the Chladni patterns that are key to understanding acoustics. 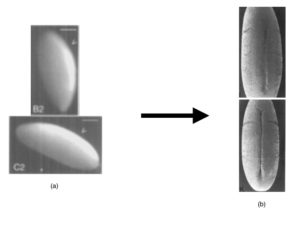 Fig. 2. Co-localisation of mitochondrial activity and biological work. Mitochondrial activity (shown in (a)), as measured by fluorescence, is high on the ventral side, which is marked by ‘<‘. The higher rate of energy release along the ventral midline, which decreases laterally and is in the shape of an eigenfunction, is coupled to the co-localised rate of biological work. The biological work includes the localised apical constriction important in the morphogenetic act of invagination and in the generation of the ventral furrow (shown in (b)). The biological work also includes the active transport of the Dorsal protein into the nucleus, which is important in ventral furrow formation and localised gene expression. ((a) is from D. A. Schiffmann, Biochemical Society Transactions; 1997;25:S653.(b) is from D. Sweeten et al. Development; 1991;112:775-789.

Biological metabolic patterns in the shape of eigenfunctions were found by C. M. Child, L.H. Hyman and their collaborators. These patterns manifest ‘symmetry breaking’ and ‘spontaneous self-organisation’ in the patterns that would be expected from the identification of (cAMP, ATP) as the Turing system. These embryologists showed that, across the wide range of organisms they studied, and for every stage in development, the metabolic patterns are co-localised with biological work and morphogenesis. For example, this applies to gastrulation, a key morphogenetic event, and thus to the formation of the ventral furrow in Drosophila, which has been considered the paradigm for gastrulation (Fig. 2).

Notably, a major problem with many aspects of ‘molecular biology’, ‘genetics’, and biology in general, has been their ‘black box’ nature: our understanding of many processes is limited to noting a correlation between a molecular change and a macroscopic change (for example, genetic mutations have been identified that produce limbs with extra digits). But the transition rule—the link between the molecular / genetic level and the macroscopic level—was missing. The identification of the Turing instability provides this missing link.