The majority of lower-limb amputees walk using a passive artificial limb; meaning the limb creates no power to assist walking. Such limbs incorporate a prosthetic foot that is designed to buckle and/or bend when the walker puts weight on it, which reduces the forces applied to the amputee’s stump and helps control the movement of bodyweight over the foot. Most types of prosthetic feet do not have an ankle; however during locomotion over level-ground, compressing/bending of the foot’s heel (cushioning material or leaf-spring keel) will lower the toe-region (simulated plantarflexion) so that the foot attains a ‘flat’ position on the ground. When walking down slopes the heel is unable to deform enough to allow the toe-region to come into contact with the slope, and as a consequence amputees have to make compensations such as increasing the amount of bending at the knee: this can compromise gait stability. This is why amputees find walking down slopes problematic. To reduce the compensations amputees require, ankle mechanisms have been incorporated into some types of prosthetic feet. However, a freely flexible ankle would mean bodyweight lurches over the foot during a step: thus how ankle motion is controlled is a critical feature of these devices. The latest generation of feet use a microprocessor-controlled hydraulic ankle. Sensors detect the angle of the terrain being walked upon and the step-rate of walking, and this information is used to automatically alter the hydraulic resistances at the ankle; thus facilitating a more optimum foot-ground interaction for variations in walking surface or speed. 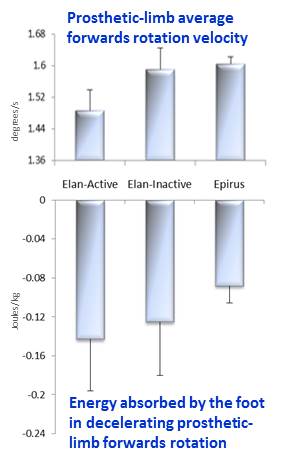 This study evaluated how below-the-knee amputees walked down a ramp using a microprocessor-controlled hydraulic ankle-foot device (tradename: Elan) compared to using conventional ankle mechanisms. With the Elan in ramp-descent mode, following foot-contact with the ground the hydraulic resistance at the ankle is reduced to ease the lowering of the toe-region to the ramp, at which point resistance is increased to slow rotation of the prosthetic limb over the ankle: which in turn should control how bodyweight advances forward over the limb/foot as it is lowered down the ramp. Nine amputees completed ramp descents with the Elan’s microprocessor active or inactive (switched via Bluetooth). When inactive the hydraulic resistances revert to those deemed ideal for walking on level ground. For further comparison, amputees also used a foot with a rubber ball-joint ankle (Epirus): for many years this was the only type of ankle mechanism clinically available. The Elan and Epirus use an identical foot incorporating carbon-fibre blades for the heel and forefoot; thus the only difference between the ‘active’, ‘inactive’ and ‘rubber’ ankle conditions was the differing ankle-motion resistance. Our analysis involved comparing, across the three different ankle types, limb angular motion, muscle work done at the stump’s knee joint, and the energy absorbed/returned by the ankle-foot device. As expected, attaining a ‘foot-flat’ position on the ramp was quickest with the rubber ankle but importantly quicker with the active- compared to inactive-hydraulic ankle. During the subsequent period, the energy absorbed by the ankle-foot in decelerating forwards rotation of the prosthetic limb was greater when using the active-hydraulic compared to other two ankle types, and as a result  limb rotation velocity was slower (see figure). These findings indicate bodyweight progressed over the limb/foot and down the ramp in a more controlled manner when using the active-hydraulic foot. Because of the increased control it exerted, its use also reduced the amount of compensatory bending and muscle work done at the stump’s knee joint. These findings suggest that using an Elan microprocessor-controlled hydraulic ankle-foot device will improve gait stability and reduce the biomechanical compensations used to walk down slopes.