Varicella. A case report: With palms and sole of foot affectation

Varicella is caused by Varicella Zoster Virus (VVZ). This virus produces two different clinical manifestations of diseases: varicella and herpex zoster. It is present all over the world. 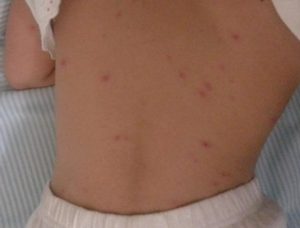 In children, varicella is a mild disease, but in contrast it could be very dangerous and suffering from many complications in adults. It is a contagious disease due to the oral and nasal secretions and the direct contact with the lesions. The incubation period is about 14 – 16 days and the high infection is forty eight hours dermatologic lesions appear to crust.

In children, the typical manifestation is fever, loss of appetite, sore throat and the appearance of dermatologic lesions twenty four hours later. It is an exanthemateus disease, which is a variable eruption. You can see all kind of dermatologic lesions. Firstly, circle red areas, and later blebs, pustules, crust…and most of the time, they can be observed at the same time.  They sting a lot. Usually, the dermatologic lesions are distributed over the face and on the trunk of the body. Varicella lesions do not usually affect the distal part of the body. 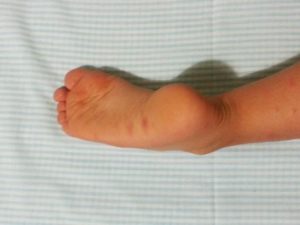 Sometimes there can be complications, such as neurological diseases or pneumonia. The diagnosis is clinical, which means that you don´t have to perform clinical testings. Treatment are physical measures like antihistamines for stinging, or calamine lotion. In some occasions, during severe stages of the disease of for pregnant women, you apply other type of medication (aciclovir).

We expose a case report based on a healthy nine years old girl who suffers from varicella with palms and sole of foot affectation (Fig, 1 and 2). It is a very exceptional case, because these areas are not usually be affected. There are some cases described in persons with affectation of their immune system or with several forms of varicella.