American trypanosomiasis, also known as Chagas disease, is one of the most serious protozoan diseases which occurs throughout Latin America. Its etiological agent is Trypanosoma cruzi, a flagellate protozoa, which is transmitted to humans and other mammals mostly by the bite of a blood-sucking triatomine bug. The World Health Organization (WHO) estimated that 7 to 8 million people are infected worldwide, mostly in Latin America where Chagas disease is endemic. To date, only two drugs, benznidazole and nifurtimox, are available on the market to treat this disease. However, these compounds provide unsatisfactory results for the chronic form and suffer from considerable side effects. Consequently, there is a crucial need for new drugs which would ideally be affordable, safe and effective to treat this neglected disease. According to WHO, plants represent the best source for obtaining a wide variety of innovative compounds and could benefit a large population. One of them, Waltheria indica L. belonging to the botanical family Malvaceae, is a shrub widespread in subtropical and tropical regions of the world. In traditional medicine, the roots, aerial parts and whole plant are taken as a drink, are chewed or directly applied on wounds. Many ailments such as skin ulcers, rheumatism, diarrhea, hemorrhoids, asthma or tooth infections are treated with this plant. In Africa, W. indica is used to treat parasitic diseases like malaria or cattle sleeping sickness. 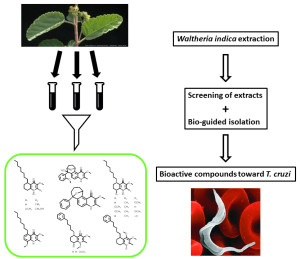 With the aim of discovering new natural products with antiparasitic activity, extracts of various polarities from the aerial parts and roots of W. indica were prepared and screened. Twelve quinoline alkaloids were isolated and identified from the extract active against T. cruzi. This series of compounds showed potent in vitro growth inhibition of the parasite with activity values equal or even lower than the reference drug benznidazole. However, the cytotoxicity was high for these compounds except for one, waltherione C. This compound had a selectivity index (activity compared to toxicity) superior to 50, meaning this alkaloid falls into the criteria required by the Special Programme for Research and Training

in Tropical Diseases at the World Health Organization and can be considered as a hit. In order to evaluate the potential of this quinolone alkaloid to become a lead, in vivo studies are in progress and further investigations are required to determine cellular target(s).