Microbial colonies that stick to surfaces or tissues are difficult to remove. The simplest way to try to detach them is to scrub them off, for example when brushing one’s teeth, but the exertion of mechanical forces can damage fragile tissues and most microbes are concealed in cavities or crevices that are hard to reach. A less invasive yet thorough treatment can be to rinse microbes off the surfaces. However, new research published in the Journal of the Royal Society Interface shows that washing swimming bacteria from clean surfaces works well only up to a point. At large flow strengths detachment becomes less effective, but instead an optimal flow strength exists, which the authors have calculated. 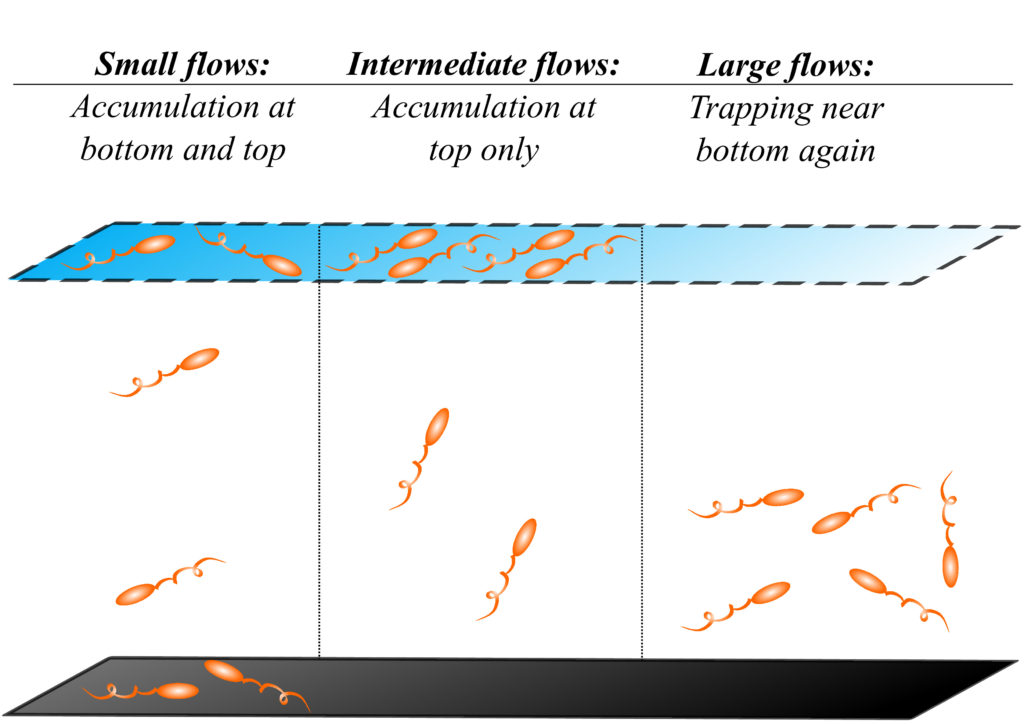 Fig. 1. Increasing the rinsing flow strength is not always the best way to remove microbes from surfaces. Left: Without external flows microbes are attracted to the bottom wall and the top interface. Middle: With intermediate rinsing flows the microbes can be washed away to the top surface. Right: With stronger flows the rinsing is actually less effective.

The authors found that there is a sweet spot for rinsing bacteria away. In films (thin layers of liquid covering a surface on which microbial colonies live), a critical flow strength is first needed to peel microbial swimmers off surfaces. If much stronger flows are applied then the interplay between the flowing film and the swimming causes the microbes to move back towards the surface, where they are more likely to form biofilms, dense groups of encapsulated microbes. To reach these conclusions the researchers have developed a systematic framework based on fluid mechanics to resolve the dynamics of swimming cells in liquid films. Apart from the externally imposed rinsing flows, the organisms themselves also generate their own “microflows”, for example by rotating a helix-shaped tail like a miniature pump. These microflows can be used to attract and attach the cells down to the bottom surface, but to a lesser extent also towards the top water-air interface (Fig. 1.; left panel).

This attachment mechanism competes with the detachment by rinsing flows. These do not pull organisms away from the surface (as the streamlines are all oriented parallel to the film) but rotate the microbes so that they can use their own swimming mechanism to leave. This rotation only takes place at the bottom surface. The minimum rinsing strength required to detach a swimmer can be computed by finding the point where these two effects of rinsing and microflows exactly balance with one another. Just above this point bacteria move to the top interface (Fig. 1.; middle panel).

Yet, this assumes that the swimmer behaviour remains unchanged as the rinsing flow strength is increased. The authors have shown that this is not the case for large flows, e.g. because the rotation is so strong that the microbe can turn a full 360° and swim back to the bottom surface again. Therefore, the attraction to the bottom surface increases with larger flows so the rinsing is less effective (Fig. 1.; right panel).

Preventing the formation of biofilms, dense groups of encapsulated microbes, reduces the need to apply biocides to hauls and maritime structures, lowers the chances of infection of medical implants, and generally keeps submerged equipment working optimally.