A walk in the park can be an uplifting experience. It can also turn into a nightmare if the outdoors are filled with blood hungry ticks. The newly published research shows that weather conditions, particularly temperature, can be used to predict the risk of tick attack. In Europe, the main threat comes from Ixodes ricinus, sometimes called the sheep tick or wood tick. This tick species carries numerous viruses, bacteria and other microbes that cause diseases in humans, dogs and livestock. The most notable tick-transmitted diseases are tick-borne encephalitis, for which there is no cure (although there is a vaccine), and Lyme disease, which can at least be treated with antibiotics. 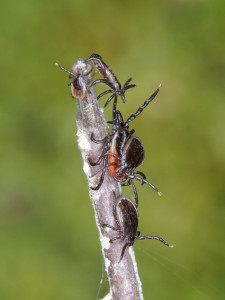 Fig. 1. Blood seeking Ixodes ricinus ticks using sensors on their front legs to sniff the air for chemicals emitted by humans or other animals (one nymph, one orange colored adult female, and 3 adult males).

Like its cold-blooded relatives, scorpions and spiders, ticks are sensitive to climatic conditions. When it is hot and dry they hide in the undergrowth to conserve water, and during freezing conditions they remain buried and dormant. Under most other conditions hungry ticks will seek out a blood meal at each active stage of their life cycle, the most dangerous being the immature nymphs as they are small and easily missed. The blood-seeking ticks climb up blades of grass and other vegetation. From this vantage point they quest for a host (their next blood meal) by waving their front legs in the air to chemically sense their prey (see Fig.1). A continuous 6 year study from 2001 to 2006, in a typical oak wood near Prague in the Czech Republic, gathered data on tick questing activity by ‘flagging’ the undergrowth with a flannel cloth at 2 meter intervals, counting the ticks collected on the cloth, and then returning the ticks back to the undergrowth. At the same time, temperature and relative humidity measurements were recorded in the tick collection site and at the nearby Meteorological Observatory. During the 6 year study, 208 monitoring visits were made to the study site and a total of 21,623 ticks were recorded. The larvae, nymphs and adult ticks showed the highest levels of activity during spring followed by a minor peak of activity in late summer or autumn (mid-summer for adult males). Near-ground temperature, day length, and relative air humidity were all significant predictors of nymphal activity. The greatest proportions of ticks of all stages were collected at temperatures ranging from 10 °C to 15 °C although blood-seeking ticks were collected at temperatures exceeding 25 °C but rarely under freezing conditions. Questing ticks were more resilient to cold temperatures (5 °C or below) in spring compared with autumn, reflecting their sensitivity to daylight length. Importantly, nymphs started their questing activity at temperatures above freezing once there was about 12 hours of daylight and ceased when daylight was reduced to 9 hours. 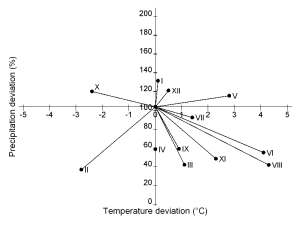 Blood-seeking occurred during approximately 70% of the calendar year without stopping in summer. Although near-ground temperature was the best predictor of tick activity, measurements taken at the local Meteorological Observatory were a good substitute. Indeed, weather predictions are now being used by the Czech Hydrometerological Institute, the Czech National Institute of Public Health, and the Ministry of Health of the Czech Republic to warn people when there is a risk of being bitten by ticks. The continuous 6 year dataset also showed the resilience of tick populations to extreme weather events. Severe flooding in Central Europe (including the Czech Republic) during August to October of 2002 was followed in 2003 by exceptional meteorological conditions (Fig.2). Although the numbers of blood-seeking ticks were severely reduced during 2003, they bounced back to typical numbers in the following year. It takes a lot to defeat ticks so best keep covered up if ticks are about.