Copper has a long history as an ingredient in mercury based tooth fillings, so called dental amalgams. The old type of copper amalgam (approx. 70% mercury and 30% copper) was provided in the form of tablets and heated over an open flame until droplets of mercury were visible. After cooling, these copper amalgams were used mainly in children’s milk teeth in individuals with extensive caries, sometimes also in adolescents and grownups. 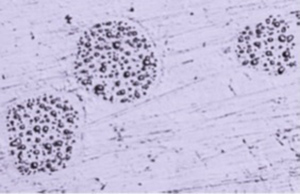 Copper amalgams are still used to some degree in developing countries but its use has been largely abandoned due to its huge corrosion rate and therefore poor mechanical strength. It was sold in Europe in 2001 and to some small degree it was used in Sweden and Norway as late as the fourth quarter of the last century. Both countries have now banned all types of dental amalgam.

The conventional amalgams dominating the last century contained max. 6% copper. It is also prone to corrosion, but to a much lesser degree than the old copper amalgam. The part of the filling most prone to corrosion is a tin-mercury compound called the gamma-two phase (γ2 phase).

In the 1970s and -80s a new amalgam was introduced, the non-gamma-two type. This was marketed as having superior corrosion resistance and strength. Today it is totally dominating the market of mercury based fillings. Standards set the copper content to max. 30% and due to a more sophisticated alloy than that of the former copper amalgam, its mercury content is reduced to around 50% by weight.

Since the main focus was on reducing corrosion and increasing mechanical strength, and due to the fact that no standard is regulating the instability of amalgams, two new phenomenon of instability slipped through the net. Firstly, when subjected to polishing and wear, droplets rich in mercury start forming on the surface within half an hour, giving a clear indication of substantial instability in this new type of amalgam (Fig. 1).

Secondly, and perhaps most disturbing, the emission of mercury vapor is highly increased, as shown in Figure 2. Some 80% of inhaled mercury vapor is taken up by the body. These new non-gamma-two alloys were extensively marketed in the 1970s and -80s and has totally dominated the market for quite some time.

Many of these new types of amalgam use spherical alloy powder invented by an American Dental Association employee. Although the ADA holds many patents for various dental products that are licensed to the manufacturing industry resulting in approximately 200 different products on the market, the spherical alloy remains unpatented. This is because grantees of the US Public Health Service were not allowed to protect their inventions before 1980. 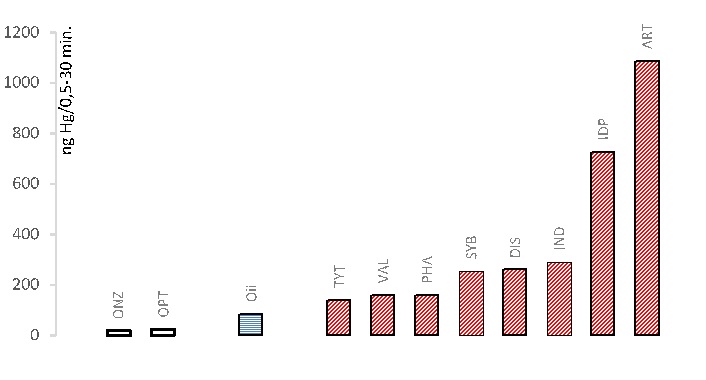 Fig. 2. Mercury vapor loss (ng) between 0.5 and 30 min after abrasion of different brands of amalgams. The two brands to the left are conventional amalgams, the middle one is a reduced gamma-two amalgam and the far right 8 brands are modern, non-gamma-two amalgams. Based on https://www.ncbi.nlm.nih.gov/pubmed/7929981

In conclusion, as a result of efforts to develop a more corrosion resistant type of dental amalgam, two new types of instability were introduced: Formation of droplets rich in mercury on polished and worn surfaces and the highly increased emission of mercury vapor. Further studies are needed to evaluate the implications of this for the working and natural environments and for persons extra vulnerable to exposure of mercury.