When shoulder replacement fails, what happens next? 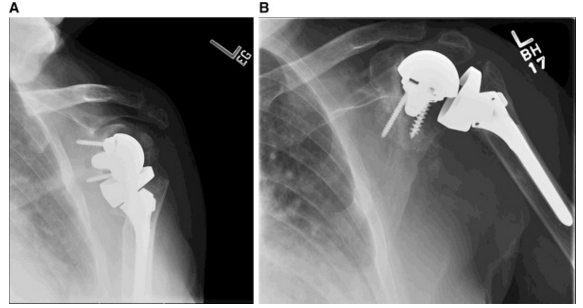 Fig. 1. ( A ) This is a patient who presented with baseplate and screw Ioosening and migraton of the baseplate 4 months after a reverse arthroplasty fcr faded hemiarthroplasty. ( B ) The patient underwent revision of his glenoid baseplate with femoral head allograft. which subsequently loosened and failed. This image was 6 months after revision RTSA. The patient chose to manage this without repeated revision surgery.

This study evaluated 228 reverse shoulder replacements that were implanted from 2004 to 2011. About 8% of patients (16/228) needed a second surgery where the original replacement was removed.

Failure of the ball (baseplate) was a difficult problem to manage. Seven patients (3%) underwent surgery for baseplate failure and even after the second surgery, 3 of these patients had another failure of the baseplate. One patient had loosening of the socket and had surgery to replace the socket.

Six patients (2.5%) had a dislocation of the reverse shoulder replacement. Surgery was successful in stabilizing the shoulder in 3 patients, while the other three had continued dislocations.

Two patients (0.8%) had an infection that required removal of the replacement and had an antibiotic implant placed in their shoulder. Once the infection was cured, both patients had a new shoulder replacement inserted.

In conclusion, complications after reverse shoulder replacement are rare, but these complications are difficult to manage. The repeat surgeries are highly complex and patients have a substantially lower success rate, although most are still satisfied after their surgeries.