When the immune system is away, biliary cancer cells may come back to play

Tumours of the biliary tract (BTC) develop from the epithelium of bile ducts located inside and outside the liver and in the gallbladder. Surgery is the only curative treatment available. However, tumours often come back after surgery (disease relapse) and less than a half of the operated patients are alive 5 years after the operation. Inflammation is among the driving forces for BTC development. However, an evaluation of genes associated with immunity in BTC tissues had never been done. In this study the expression of >700 genes associated with the patient immune response was assessed in the tumoural and peritumoural (adjacent, AT) component of resected BTC. Tumour and peritumoural areas were studied in an exploratory cohort (22 cases), while only the peritumoural tissue was analysed in the whole set of 53 cases. The expression of 770 immune-related genes was assessed using a panel for large-scale genomic analyses called nCounter Pan-Cancer Immune Profiling Panel from NanoString Technologies (Seattle, WA, USA). 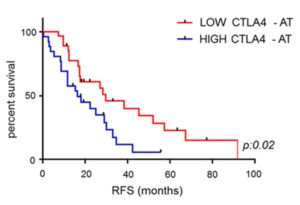 Fig. 1. CTLA4 mRNA was assessed by nCounter analysis in the entire set (n:53). Cases were divided according to low and high expression of mRNA in the AT (using median as cut-off). Median Relapse Free Survival (RFS) was 16.27 months in cases with high CTLA4 expression, whilst it was 29.53 months in low CTLA4 cases.

In the exploratory cohort one hundred ninety-five genes were found to be deregulated in tumour compared to adjacent tissue. Among them, 39 genes were deregulated more than 2-fold and were involved in the processes of inflammatory response, trafficking of immune-cells and deregulation of T-lymphocytes. Next, a Kaplan Meier analysis was performed to investigate if genes deregulated in the tumour or in the peritumoural area were associated to the risk of tumour relapse, without taking into consideration the differential changes between tumour and adjacent tissues. This was based on the seed and soil theory which suggests that the tumour (seed) may need a favourable soil (peritumoural area) to growth. Interestingly, the risk of relapse was associated with more genes in the peritumoural area than in the tumour itself, suggesting an immunomodulatory role of the tissue adjacent to the tumour and its ability to contribute to regulate tumour relapse. The expression of cytotoxic T-lymphocyte antigen-4 (CTLA-4) was associated with clinical outcome, independently on other prognostic factors such as stage of the tumour, site of origin, positivity/negativity for resection margins (R1/R0), and post-operative chemotherapy. Cases with higher expression of CTLA4 in the peritumoural area had increased risk of tumour relapse (Fig. 1).  CTLA-4 is found on a subclass of T-lymphocytes called T-regulatory cells (T-regs), which are known to block the immune response against the cancer. Indeed, CTLA-4 expression correlated with the expression of forkead box P3 (FOXP3), a typical marker of T-regs. CTLA-4 interacts with co-adjuvant molecules (such as CD80) to set a break in the immune response against the tumour. The expression of CD80 did not correlate with risk of relapse in the whole cohort. However, cases with high expression of the CD80 gene seemed to relapse earlier than cases with a low expression in the subgroup of patients who received post-operative chemotherapy. When the protein expression was assessed by immunohistochemistry (IHC), and a clear classification was achievable between cases with strong CD80 expression and cases with absent or only mild expression, a statistically difference in relapse rate was observed (Fig. 2). Indeed, post-operative chemotherapy seemed to give a benefit only in cases where there was no strong expression of CD80, suggesting that chemotherapy may work if the immune response is conserved (Fig. 2). 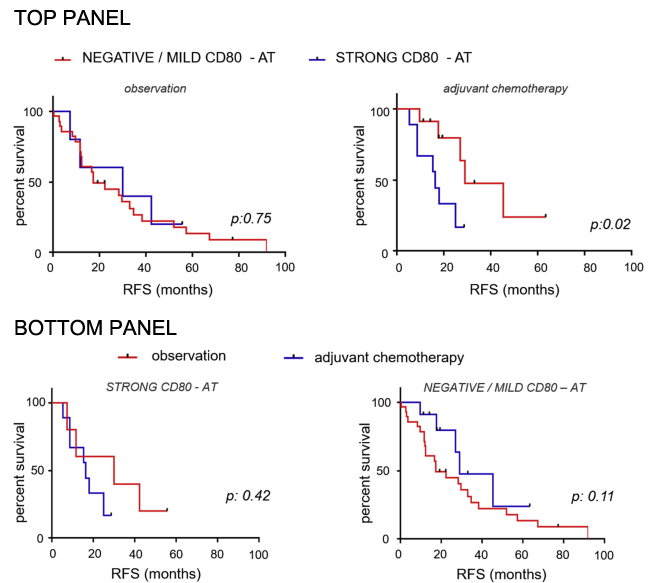 Fig. 2. TOP PANEL: CD80 protein expression was assessed by IHC in the AT of the entire set (n:53). Cases were divided according to protein expression of CD80 in the AT (+++ vs -/+/++). C. The same analysis was performed in the cohort receiving post-operative observation or chemotherapy. In the latter median RFS was 16.27 months in strong (+++) CD80 (n:11) whilst it was 28.8 months in the other (-/+/++) group (n:9). BOTTOM PANEL: CD80 expression was assessed by IHC in the AT (n:53). In strong CD80 cases median RFS was 16.27 months in the chemotherapy group compared to 29.93 months in the observation group. In the cases with negative / mild expression of CD80 post-operative chemotherapy improved median RFS from 17.23 months to 28.8 months (non-significant).

In conclusion this study showed that 1) BTC are characterized by a derangement of immune-related transcripts with an important role for the CTLA4 axis; 2) CD80 protein expression was associated with risk of relapse only in patients who received post-operative chemotherapy; 3) only patients without strong expression of CD80 seemed to benefit from post-operative chemotherapy. Definitive conclusions cannot be drawn from this study as the number of patients was small.  However, these findings may lay the bases for further research: 1) antibodies against CTLA-4 are currently available and therefore there is rationale to study their activity in BTC patients as a mean to re-address the host immune response to the tumour; 2) CD80 protein expression should be assessed in large prospective studies to investigate if it could be used to select patients who benefit from post-operative chemotherapy.