Which is the best way to intraoperatively detect an electrode array misplacement in cochlear implantation surgery?

Cochlear implantation (CI) is a worldwide well-known procedure for the treatment of severe to profound hearing loss. New surgical techniques and technological upgrades in the past years have helped to decrease complications of this procedure, but they still exist, defying experienced surgeons and device manufacturers. Major complications are defined as events that need surgical intervention with reimplantation, such as wound infections, device extrusions, device failure and electrode misplacement. 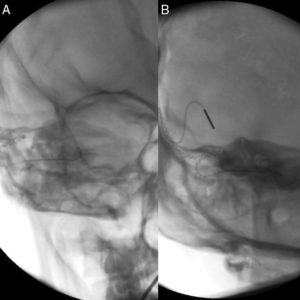 Despite the many described ways to ensure proper electrode array positioning, there is no universally accepted protocol for intraoperative monitoring during cochlear implantation. Intraoperative monitoring during CI to ensure proper electrode array position is still a subject of debate today. Electrophysiological testing based on neural response telemetry and impedance are still used for this purpose. NRT may suggest cochlear implant failure or malfunction, however the absence of NRT does not systematically indicate the lack of stimulation, because responses may be undetectable in some forms of auditory neuropathy. In the same way recording NRT does not necessarily imply correct intra-cochlear positioning of the implant because neural response telemetry can be obtained if the electrode is inserted in the vestibule or misplaced inside the cochlea. Normal impedance has been obtained as well in extracochlear and intracochlear arrays misplacements. Therefore, some authors consider that there is no standard electrophysiological method of confirming CI placement.

Unlike electrophysiological testing which are normally used in all centres, an intraoperative radiologic control is not done routinely in all centres and its use is still controversial for some authors. Copeland concluded that intraoperative plain radiographs had negligible value in assessing correct electrode array places, due to the low incidence of this complication and because the results would not significantly change the intraoperative management. Contrarily, Dirr, who recommends this technique, reported that although electrode misplacements were rare, nearly half of the cases of misplacement would have been diagnosed if an intraoperatively radiological study would have been done. In some centres, a plain X-ray of Stenver’s trans-orbital view or a CT-scan is performed postoperatively and if a misplacement is diagnosed, a revision surgery is performed.

We recently published a case of an intracochlear array misplacement (tip rollover) that was diagnosed intraoperatively with a fluoroscope after normal electrophysiological tests. Knowing that the electrophysiologic test alone is not enough to assure the correct insertion of the cochlear implant array in the intra-operative setting and given the risk of a revision surgery due to an electrode array misplacement or a poor functional outcome of the cochlear implant during the follow-up, we consider that it is necessary to complement this study with a radiological one. Intraoperative radiological imaging gives real-time information about the electrode array location.