Will exposure of irritant chemicals to the eye lead to adverse systemic outcome?

Eye is a delicate and highly vascularized organ. It captures visible light and converts it into sensory inputs with the aid of the retina and central nervous system subsequently giving rise to vision. Any chemical or drug on prolonger exposure can enter the systemic circulation through the rich network of conjunctival blood vessels or through the high vascularized nasal mucosa in the nasolacrimal route. The tight junctions present between the corneal cells prevent most of the chemicals from entering the systemic circulation. However many harsh irritant chemicals may cause inflammation and compromise the tight junction integrity leading to a leaky vasculature. Once these chemicals enter the systemic circulation they may damage various major organs like brain, liver and spleen (Fig. 1). 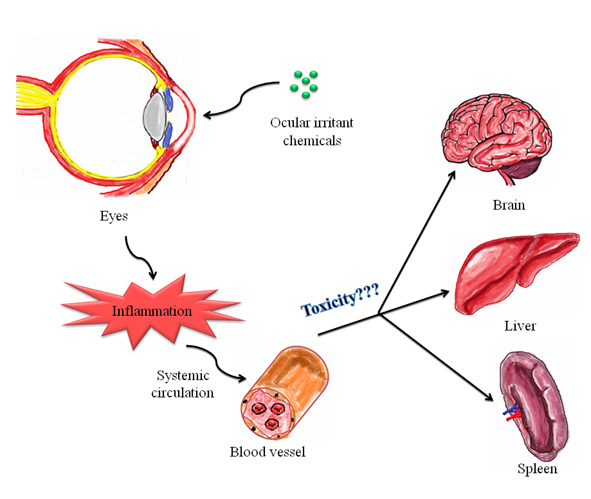 Eyes of the New Zealand white rabbits were exposed to ocular irritant chemicals (Cetyl pyridinium chloride, sodium salicylate, imidazole, acetaminophen and nicotinamide) repeatedly over a period of 7 days. Eye irritant chemicals were chosen as it causes inflammation in the eyes. During inflammation the corneal tight junctions become permeable. This allows the entry of chemicals/drugs into the systemic circulation and may cause toxicity. The eyes of the rabbits were scored as per Draize scoring after applying the ocular irritant chemicals. Redness, discharge from the eyes and chemosis of the iris were observed following exposure to the ocular irritant chemicals. In order to confirm inflammation the eyes were subjected to ELISA of pro-inflammatory cytokine (IL-1α, IL-1β, IL-8 and TNF-α) and histopathalogical analysis. There was an evident increase in pro-inflammatory cytokines suggesting inflammatory response in the eyes. Inflammation was further confirmed by histopathological analysis where infiltration of immune cells and congestion of blood vessels were noticed. However, it was noticed that imidazole had an anti-inflammatory response. Serum biochemistry and hematology of the rabbits were analyzed to ascertain the health status of the animals. The serum biochemistry analysis indicated the liver and kidney functions were normal. From the hematological analysis it was noticed that there was no adverse immune reactions, anemia or platelet activation in the rabbits exposed to ocular irritants. The effect of the chemicals on the oxidative stress parameters such as lipid peroxidation, concentration of glutathione and activity of antioxidant enzymes such as glutathione reductase, glutathione peroxidase and superoxide dismutase in the brain and liver treated animals were assessed. Brain and liver of treated animals did not show any prominent increase in lipid peroxidation. The concentration of non enzymatic antioxidant glutathione also remained unaltered. The activity of enzymatic antioxidants was not affected. This suggests the balance between oxidants and antioxidants in the brain and liver of ocular irritant exposed rabbits were maintained. Immunotoxicity was analyzed by spleenocyte proliferation assay. The change in spleenocyte proliferation was negligible suggesting no adverse immune response was elicited. It was concluded from this study that the sub acute exposure to ocular irritants in rabbit eyes did not invoke a systemic toxicity response in the present scenario.