A genetic switch for your health

We all have heard that reducing your caloric intake improves your health and may even extend your life. A fascinating aspect of calorie restriction is that it has similar beneficial effects in virtually all animal species tested. Furthermore, a prominent feature of calorie restriction is that it results in less cancer. Not surprisingly, these findings fuel the hope of being able to improve our health and live longer and it has sparked a whole new market: we are flooded by different and often opposing advices about how to achieve healthy aging by diets. 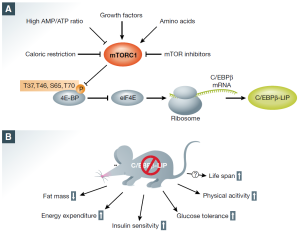 (A) mTORC1 integrates different signals related to nutrients, energy and growth factors. mTORC1 activation results in a chain of events ultimately stimulating the production of a specific small sized C/EBPβ-LIP protein. (B) Genetically modified mice that are deficient in C/EBPβ-LIP production have an improved metabolic profile and are healthier. Published in Albert and Hall (2015) EMBO Rep. 16, 881-882.

The truth is that we still do not understand very well what the biological (molecular) mechanisms are that are at work in our cells and that determine how healthy we are. We need a better understanding of the biological details to be able to develop scientifically justified and defined strategies against age-related diseases. Our aim is to find within the cellular calorie restriction pathway possible targets for intervention and develop drugs that could act as calorie restriction mimetics and/or be used for anti-cancer treatment.

The so-called mTORC1 complex that resides in our cells is a central regulator of metabolism. mTORC1 senses the amount and kind of nutrients that are available and instructs the cell to either grow and store energy (plenty nutrients available) or to maintain and survive (under nutritional harsh conditions). We have discovered that a gene-regulator protein called C/EBPβ is instructed by mTORC1 to either turn on or turn off genes a cell requires to switch between the growth/energy storing program and the maintenance program. Thus, when you consume food (nutrients) mTORC1 senses this and sends a “go” signal into the cell. This signal is used to adjust the function of the C/EBPβ protein by altering its size, in order to regulate those genes that let cells store excess of nutrients in the form of body fat. That’s why you gain weight by storing fat when you eat too much. So, how does C/EBPβ know about mTORC1? The C/EBPβ gene contains a small piece (element) that senses the activity of mTORC1; this element makes the C/EBPβ gene a slave of mTORC1.

We removed that particular piece of C/EBPβ gene in mice rendering C/EBPβ independent from mTORC1. Although mTORC1 still can sense the consumed nutrients it cannot ‘instruct’ C/EBPβ to perform its job accordingly to turn on the fat storage program upon nutrient intake. Intriguingly, although these mice eat similarly unrestricted as normal control mice their body thinks that it is on a reduced calorie diet. That’s why these mice are healthier than their normal littermates. They are leaner with more healthy metabolic parameters, being less prone to develop diabetes Type II and having a better physical condition. Cancer cells often hijack mTORC1 for their own interest to stimulate tumor growth. Therefore it is believed that pharmacological inhibition of mTORC1 slows cancer growth. Interestingly, the adjustment of C/EBPβ protein size and function seems also to play a role in cancer development. Based on these findings our discovery may also result in new strategies to treat cancer.