A hereditary mutation in Schwartz-Jampel syndrome

Schwartz-Jampel syndrome (SJS) type 1, also known as chondrodystrophic myotonia, is a rare autosomal recessive disorder characterized by short stature, neuromyotonia (sustained contraction of skeletal muscles), chondrodysplasia (abnormal development of the cartilage of long bones), joint contractures, blepharophimosis (narrowing of eye fissures), myopia, and pigeon chest. SJS is caused by hereditary mutations in HSPG2, a gene encoding perlecan. HSPG2 is a large gene with a coding region of 13,173 bp encoding 4391 amino acids. Perlecan is a heparan sulfate proteoglycan with five distinct domains (a cluster of consecutive amino acids with a specific function) (Fig. 1). Perlecan carries three glycosaminoglycan chains (long unbranched chains consisting of repeats of two sugars) at the N-terminus. The molecular weight of the glycosylated perlecan is ~800 kDa. The N-terminal heparan sulfate-binding SEA domain (domain I) is unique to perlecan, whereas the other four domains have similarities with domains of the other molecules. Perlecan binds to a wide range of molecules including growth factors and other extracellular matrix components.

SJS is an orphan disease. A total of 31 mutations have been reported in SJS. Six of them are amino acid-substituting mutations (missense mutations). Among the six missense mutations, one mutation has been deeply characterized. A patient-derived missense mutation substituting cysteine at codon 1532 to tyrosine (p.Cys1532Tyr) in perlecan was genetically engineered into mice. The mice showed sustained contraction of skeletal muscles. The sustained contraction was due to abnormal myelination of the terminal Schwann cells that encapsulate the terminal axon of the spinal motor neuron. Lack of the terminal Schwann cells causes persistent activation of the axon of the spinal motor neuron. The sustained muscle contraction is also accounted for by partial deficiency of endplate acetylcholinesterase. Acetylcholinesterase at the neuromuscular junction is bound to the triple helical form of collagen Q. Collagen Q is anchored to the neuromuscular junction via perlecan. Thus lack of perlecan causes lack of acetylcholinesterase. 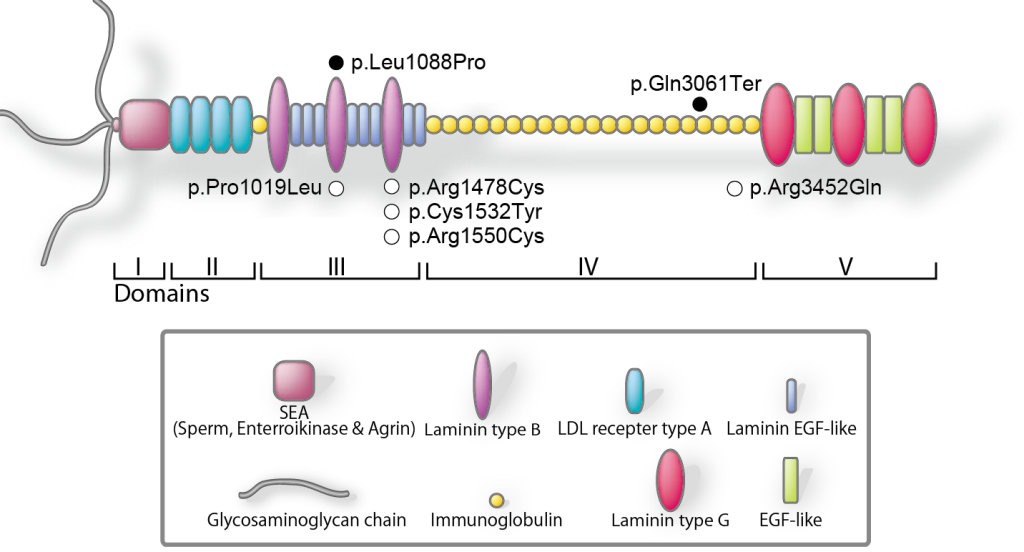 An 11-year-old Japanese boy with SJS showed rigid walking with less flexion of knees and ankles, and had protruded mouth. His intelligence was normal. Whole genome resequencing with the next generation sequencer revealed a mutation substituting leucine at codon 1088 to proline (p.Leu1088Pro) in domain III of perlecan on one allele. The patient carried another mutation substituting glutamine at codon 3061 to a stop codon (p.Gln3061Ter) in domain IV of perlecan on the other allele. To characterize the effect of the leucine-to-proline substitution at codon 1088 (p.Leu1088Pro) in domain III, we expressed wild-type and mutant recombinant domain III in mammalian cells. Domain III carrying p.Leu1088Pro was not efficiently expressed in the cells and was not at all secreted in the culture medium. To examine whether the lack of secretion was due to a low expression level of domain III or to compromise secretion of domain III, an inhibitor of protein degradation was added. The inhibitor increased the expression of domain III in the cells, but failed to rescue its secretion into culture medium.

Including the currently reported patient, a total of seven missense mutations in HSPG2 have been reported in SJS (Fig. 1). Five of the seven missense mutations are at domain III. Domain III is likely to be essential for secretion of perlecan into the extracellular space, and hereditary mutations at domain III may compromise secretion of perlecan to the extracellular space.