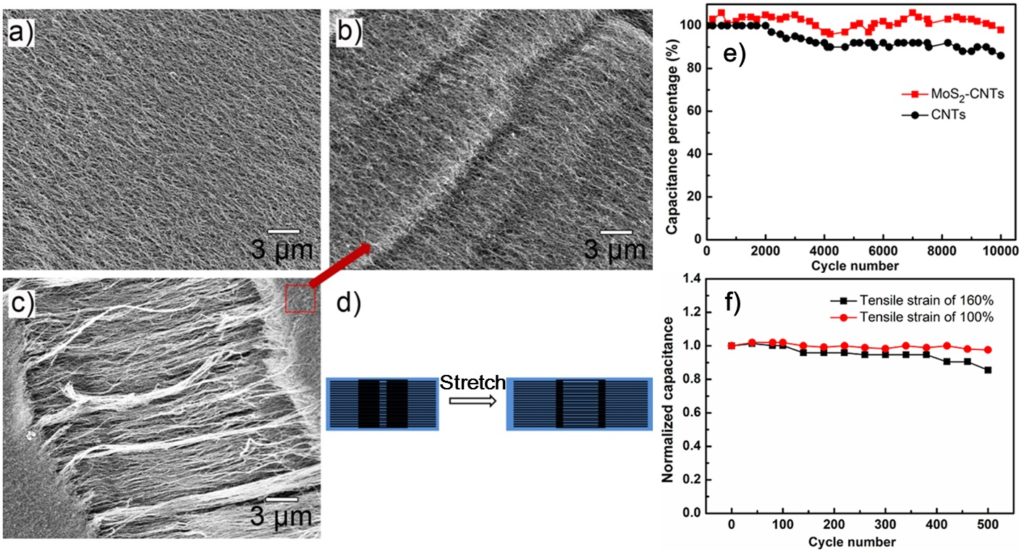 In this study, a three-dimensional vertically aligned CNT array was first synthesized through chemical vapor deposition, which was directly transferred onto an elastic substrate (Polydimethylsiloxane, PDMS) by pressing, formed a compact horizontally aligned CNT film on PDMS. The compact structure enabled CNTs inside the film with perfect contact with each other even under large tensile strain (Fig 1a-d), resulting excellent stretchability (up to 240%) as the CNT films embedded in PDMS and polyvinyl alcohol (PVA). For supercapacitor application, layered molybdenum disulfide (MoS2) nanosheets were introduced into aligned CNT films to enhance the performance of the resulting energy storage devices. The stretchable supercapacitors were fabricated by using the PDMS-supported CNT films or CNT/ MoS2 composite films as both current collector and electrodes, which was sandwiched with a layer of polymer gel (served as both electrolyte and seperator) in between. The newly-developed supercapacitor based on CNT/ MoS2 composite showed a specific capacitance of 13.16 F cm–3, which also showed excellent cycling retention (98%) after 10,000 charge-discharge cycles (Fig. 1e). These all-solid-state supercapacitors can maintain their original performance even stretched up to 240% strain, which can also bare over hundreds of stretching cycles to 160%, suggesting excellent stretchability and stability (Fig. 1f). The excellent stretchability of supercapacitors can be attributed to the used highly stretchable PDMS substrate and the compact aligned CNTs bonded together by polymer chains in the gel electrolyte. In conclusion, this work presented a general and effective paradigm to develop high-performance electrodes for flexible and stretchable electronics, not only energy storage but also energy conversion devices.